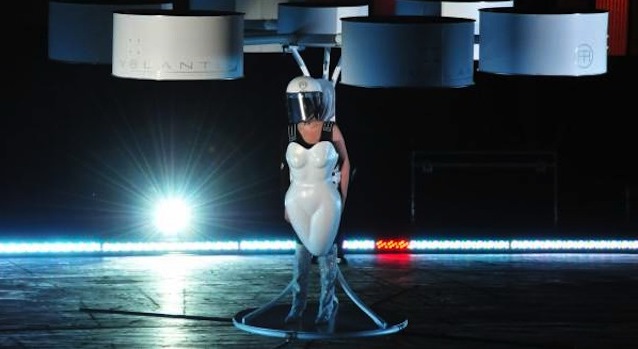 Is Lady Gaga taking fashion to the next level with her flying helicopter dress?

Lady Gaga introduced the world’ first ‘flying dress’ at the launch party for her new album yesterday, and in the process knocked off her own chicken nugget/sheep face outfit from the top spot of wacky costumes.

It doesn’t seem to have that good an engine though, nowhere near powerful enough to buzz her back to outer space. Kind of false advertising really — a ‘flying dress’ that barely comes off the ground. A bit like those remote controlled helicopter toys we had as kids that were flying over oceans and into sunsets in the adverts but in reality you end up flying it over a puddle in the pavement before it crashes to the ground. So yeah, cool dress Gaga but give us a shout when it actually flies.

â˜› Read Next: Is Lady Gaga A Pawn For The Dreaded Illuminati?