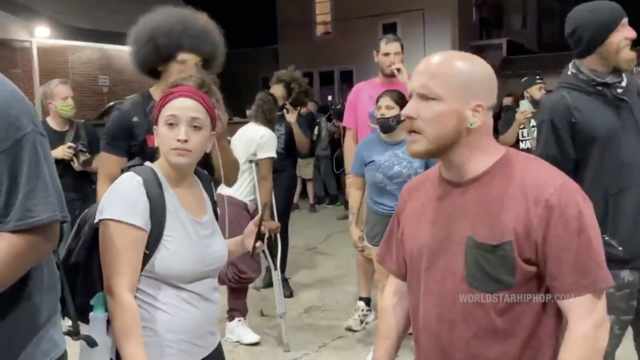 The other night, 3 BLM protesters were shot (2 killed) by 17-year-old Kyle Rittenhouse at the Kenosha, Wisconsin riots that have been raging on since the police-related shooting of Jacob Blake. Rittenhouse has since been arrested and charged with murder.

Interestingly, a video is now doing the rounds that shows one of the victims – 36-year-old registered sex offender Joseph Rosenbaum – taunting the shooter and saying to him “shoot me”:

A white guy supporting BLM and dropping N-bombs? O…K then? Joseph ended up getting his wish and was shot to death later that night after being part of a mob that chased Kyle Rittenhouse down. An awful situation no doubt but to be honest I’d have a bit more sympathy for the guy if he wasn’t a paedophile/sex offender:

The 3 shot (2 killed) in #Kenosha, Wisc. at the BLM riot have been identified.

Joseph Rosenbaum, 36, was the first one killed. Video allegedly shows him chasing teen shooter & throwing something at him. Rosenbaum was a registered sex offender for a sex crime involving a minor. pic.twitter.com/up1VgDyrgZ

Here’s some info on the other two victims:

Anthony Huber, 26, was shot & killed in Kenosha, Wisc. at the BLM riot. He was filmed chasing down the armed teen and hitting him when he was on the ground with a skateboard. He has a criminal history that includes charges of battery & repeat domestic abuse. #KenoshaRiots pic.twitter.com/1rvx7ltKKS

The third who was shot (& survived) is Gaige Grosskreutz, 26. He’s a member of the People’s Revolution Movement. He was filmed chasing after the teen w/a pistol. He was shot at close-range in the upper arm. He has a criminal record that includes being intoxicated & armed w/a gun. pic.twitter.com/U9Q3R7pcPH

The video of the shooting itself is easy to find if you Google it but I’m not sure if we’re allowed to post it, so I won’t. Opinion seems to be split online over whether Kyle Rittenhouse was justified in shooting the men as they were part of a mob who had chased him and knocked him to the ground and so there’s potentially a self-defense argument to be made. At the end of the day though he did show up to the Kenosha protests with an AR-15 so was obviously looking for trouble to some extent and boy did he find it.

Doesn’t look like the protests in America are letting up anytime soon so expect more insanity out of the Antifa/BLM riots in the coming days, weeks and months. What impact will all this have on the November 6th elections?

For the elderly business owner brutally beaten up by looters while trying to defend his business from going up in flames, click HERE.