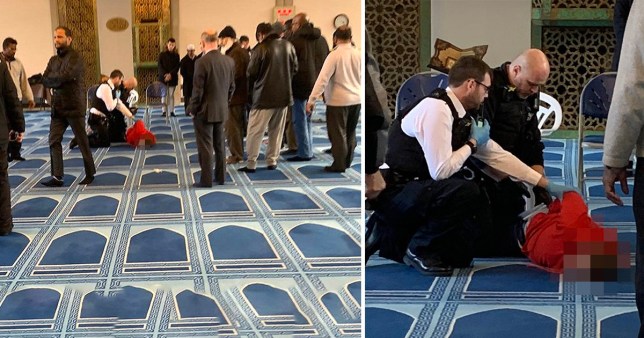 He’s been arrested for attempted murder.

Another day and another racially motivated attack in our country’s capital, as police have revealed that they were called to a Regents Park mosque this afternoon where a Muslim man had been stabbed in the neck.

Here’s what an official police statement said about the incident, as well as a couple of videos on social media:

Police were called to a mosque in Park Road, NW8, at 15.10hrs on Thursday, 20 February, to reports of a stabbing.

Officers attended along with paramedics from the London Ambulance Service (LAS). A man was found with stab injuries.

He was treated by paramedics before being taken to hospital. We await an update on his condition.

A man was arrested at the scene on suspicion of attempted murder.

Grim. Obviously people are probably going to think that this is a racially motivated attack because the guy is white and it took place in a mosque during the call to prayer and you’ve gotta really assume that they’re right at this point because why would anyone knife someone there and then if it wasn’t? I thought this stuff might get better now that Brexit was ‘confirmed’, but I guess not. Great.

We’re not sure how the man who was stabbed is faring at the moment but someone said it was non life threatening so he should be OK. Sure that we’ll hear more about it in the coming days, but the sad thing is that this kind of stuff seems to be happening every freakin’ week now. What have we got to do to stop it?

For more of the same, check out this horrible zombie thug and his collection of knives. Disgusting.