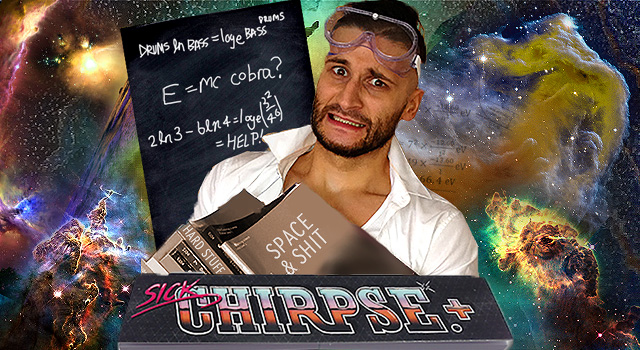 Don’t know about you, but I think good music needs two things. Drums. And bass. A guy who knows a thing or two about that is DJ Hype. He inspired me to become a DJ when I was kid and still casts an intimidating shadow over any new school challengers.

Today I was thinking, as I do every now and again, about the reason why DJ Hype’s dubplates, battered and bruised by endless gigs, never fall through the SL1210 turntable when he throws them down to be heard by the masses.

You may have heard that matter is 99.99Í˜% empty space — and that’s correct — so, if that’s the case then why is it that we don’t fall through the floor?

The answer is fascinating. Here you have an everyday situation which most of us never even question, and yet, the explanation directly relates to the reason the stars shine in the night sky. This marrying of the dull with the sublime encapsulates exactly why a speed garage-spinnin’ geezer like myself finds astrophysics and quantum mechanics so interesting in the first place!

â˜› Next: The Solar System — Something To Think About

If we were to be pedantic about it (which we won’t be), there are two main reasons why you don’t fall through the floor. The first reason is to do with the negative charge of electrons. If you get two like-charged magnets and try and touch them together — you can’t. So electrons repel each other for the same reason. However, this is largely negligible in comparison to the second reason — “degeneracy pressure”.

This says that you can only push massive particles to within certain proximities of each other unless they experience such a powerful gravitational force, that they are forced to smash together in a big explosion.* When a star-sized clump of hydrogen forms in the cosmos, the gravity that acts on the electrons and protons is so strong at the centre, that the degeneracy pressure apposes this gravitational pull as the particles resist being pushed too close together. This resistance creates a huge amount of heat.** High temperatures at the core of the star then send electrons flying off the hydrogen atoms.

With these hydrogen atoms now consisting of only one proton, a force of nature called the “weak nuclear interaction” steps in.*** This force of nature (a personal favourite for space geezers like me) spontaneously transforms protons into neutrons which sets off a chain of events leading the fusion of hydrogen and the creation of helium. Nuclear fusion of small atoms releases an incredible amount of energy — and we see that as stars shining.

So it’s degeneracy pressure that stops you falling through the floor (…and, indeed, keeps those bad boy dubplates spinning). This has nothing to do with density of objects — at least, not in the traditional sense! Instead, the likelihood of falling through the floor relies on the types of atoms that make each structure, and how heavy they are. The physics behind this falls under the domain of quantum mechanics. This is because the sub-atomic particles have wave-like behaviour, fluctuating in-and-out of position like a cloud of matter made from one single object.

So next time someone tells you to take your elbows off the table, tell ‘em to chill out and explain that the fact we can’t penetrate solid surfaces on Earth is an example of the supreme power possessed by the Sun over humanity due to its enormous size. That, or just say uncle Kissy said you could ; )

Next week: Why you shouldn’t be afraid of dying — yup, really!

â˜› More Space & Shit? A Lesson In Perspective From The Hubble Telescope