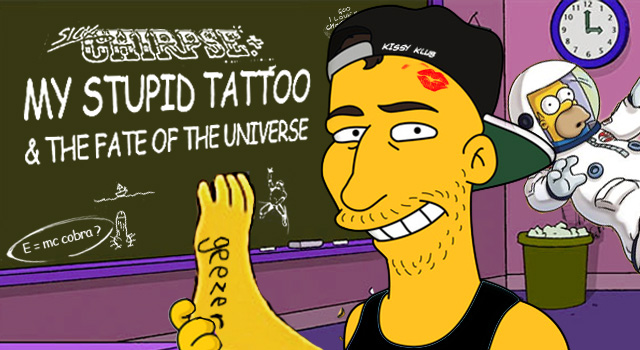 East London’s speed garage DJ legend reveals amazing facts about space and the universe from his experience as a part-time astrophysicist.

Now, as a scientist, I wouldn’t make such a bold claim without evidence. Luckily, I got pissed on a mountain in France four weeks ago and, having gone missing for half an hour around about 9.32pm, I returned to the bar with this…

I have that forever.

Believe it or not, it wasn’t scribbled on by a four year old – although it might as well have been! …I mean, just look at it! The first “e” has been done four times…I’m listed on the famous alumni of Central Saint Martin’s art college for heaven’s sake!?!

So then, what to do with this ridiculous affliction…? Well, as it happens, I can relax a bit because the most pervasive, unquestioned and influential phenomenon in the universe has already stepped in. They say “few things are certain in life except death, taxes and Peter Andre loves his kids” (well, I say that anyway), but there’s also something else, and that something is called “Entropy”.

This stems from the second law of thermodynamics which simply says that heat will distribute itself equally across a closed system as time passes. As I will explain, this law of nature applies to everything in the universe. EVERYTHING. It is the reason your car battery goes flat, the reason your headphones cable gets tangled up, the reason that dead animals were compressed in to crude oil 100,000 years ago, and it will also eventually be the reason that you die.

â˜› More Of Kissy’s Astrophysics Lab: Why You Shouldn’t Be Afraid Of Dying — Yup, Really…

So, entropy can be quite an edgy subject. In fact, it’s a cosmological phenomenon which, when addressed in the context of life and the universe, most scientists in the public eye often don’t have the stones to comment on, or think you’re too stupid to understand.

I think, however, that this is a truly heart-warming subject to discuss. This is because it is also the reason why “life” is the most precious, unique, and valuable thing in the universe…and also the reason why my epic tattoo has thankfully begun to fade a little!

Let’s start with something simple, and imagine you have just filled up a bath tub with cold water. Now, because I’m an English gentleman (as well as a geezer, obvs), I hand you a piping hot cup of fine green tea. You now pour the contents of the mug into the cold water. What do you think will happen to the overall temperature of the water?

This isn’t a trick question, the answer is obvious — the temperature of the water-tea mixture will equal out to an evenly warm state, after a few seconds. The reason why this happens is because the molecular contents of the bath tub (and, indeed, the room the bath is sitting in) will tend to a less-organised state as time passes.

In other words, whilst the complexity of the bath water “system” briefly increases — the hot pocket of tea momentarily floating in the water — the arrangement of hot and cold molecules is soon equalled out again, into the simplest arrangement possible. The green splodge of tea diffuses through the surrounding water and we are left with lightly-tinted, green bath water (…ew!).

So entropy is a measure of complexity in systems.

The natural tendency, or “direction”, of entropy is to increase positively, and since the universe has been getting less organised and more uniformly distributed since the big bang, this direction of energy distribution is often called “the arrow of time”. So as time continues to move forwards, the universe will get colder and colder until eventually it will reach “heat death” — but not until at least 10100 years time.*

The cosmos is full of complex systems slowly cooling-off and turning into simpler systems. This “cooling-off” factor is important, because the “information” inside objects radiates out into the atmosphere just as heat does.

Black holes, for example, eventually stop spinning and vanish because the information absorbed by a black hole sits around the edge of it on something called the “event horizon” (like that kick-ass horror film). The event horizon therefore, essentially is the entropy of a black hole.

Over time, gravitational waves carry away the information absorbed in to the black hole by radiating the energy outwards as ripples in gravity. This form of radiation was discovered by Stephen Hawking and is called “Hawking Radiation“.

One of the L.I.G.O. observatories built to detect and prove the existence of gravitational waves.
Lasers are fired for miles and then reflected back again so that ripples in space-time can be detected
when the rays of light go out of phase.

As one last example, ask yourself what happens to your computer hard drive as time passes?

Well, you probably haven’t noticed*, but an unplugged external computer hard drive filled with data is actually hotter than an empty one. So as time moves forward, tiny bits of information kept in your family photos and miniscule bits of data from your movie torrent files are actually evaporating out into the atmosphere!

Now, let’s speed this up a little and get to my final thoughts on all this. Back when I first learnt about this stuff myself, I immediately thought of something that actually doesn’t follow the arrow of time — at least, not in the same way as everything else in the universe does. Can you guess what it is?

Well, it’s “life”, to be more specific. Life on Earth is an example of something called “localised negative entropy”. This means that as time passes, we actually get more complex.

We grow bigger and even reproduce — every form of life does this. From the grass on your lawn and the tall old trees that grow in the forest, to the flees on your pet cat/dog/suicidal hamster.

Life is the one thing that doesn’t play by the rules of the universe.

I think this is a big deal and you should too! The ability to push the most universal of cosmological phenomena in the opposite direction, can be subjectively thought of as a life-force, and it’s something we all share!

Think about the way in which this sub-atomic disobedience binds humans of every skin colour, every nationality, and every religion — together as one. This includes plants, animals and microbial life as well of course. Only humans have the unique sense of individual self-aware consciousness, but all life on Earth is just as special.

In fact, all life on Earth is an endangered species, when viewed in the context of the universe.

How can life move against the grain of the universe without breaking the laws of physics? Well, I hate to bring you back to bath water again, but it’s to do with bubbles. Yes, bubbles!

When that cup of tea originally struck the cold water below, it didn’t just silently transition into the water. It made a splash. Splashes create bubbles, and then the bubbles disappear.

So the bubbles are an example of localised negative entropy as well.

Bubbles aren’t as special as you and me — they don’t possess properties of life — but, for a few brief seconds, the information and heat energy that is contained in the cup of tea is used, like fuel, to create the little bubbles. This doesn’t break any rules of the universe because the bubbles themselves immediately radiate their internal energy out into the surrounding atmosphere. Then they evaporate completely.

In your lifetime you will do many wonderful magical things, but as the years go by, activities will take a toll on your body. So just like bubbles in a mountain stream, or the giggling sound waves made by a new born baby, the energy that holds your body together will eventually expire and radiate out into the surrounding universe.

That is the main reason why we need to continue developing technology that can help us leave this planet and travel, efficiently, out of our solar system and on to other stars and planets.

So next time you get in to the car and put your seat belt on, remember that you are the most previous cargo in the known universe.

I kinda miss my tattoo now…

Next Week: Five Ways To Make Our Planet Explode!