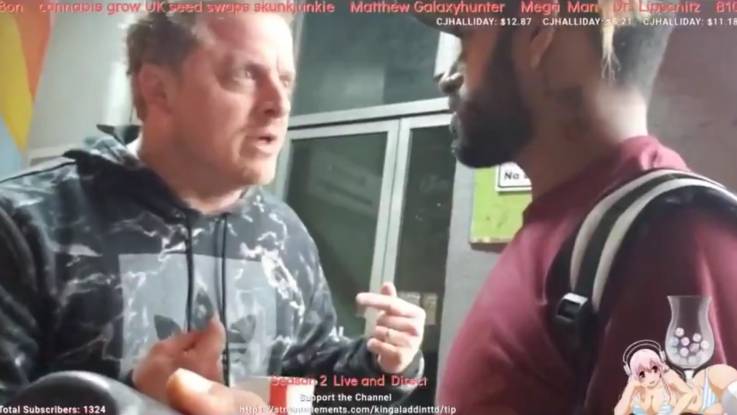 There’s nothing more satisfying than when one of these gassed up YouTubers meets their match and have no choice but to carry on streaming as someone bigger and badder completely emasculates them on their own livestream.

In the now-deleted video, YouTuber King Aladdin films himself on the streets of LA using a selfie stick. He begins to cat call a teenage girl, not realising she happens to be the 15-year-old daughter of Hollywood comedian Skyler Stone.

Thankfully, Keemstar ripped the clip so this footage of King Aladdin looking like a total twat can live forever:

Absolutely love the death stare and the “you just entered my world” line. Great restraint to not smash the guy’s face/phone as well, considering how cocky he was carrying on. Zipped it real quick when the girl’s dad got in his face though. Naturally, he kept running his mouth when he realised Skyler was out of earshot. Sigh…

The comedian commented on the incident after the clip went viral:

I’m the “angry father” in this vid that’s going viral. I knew he was filming. Thats the only reason he still has a working smile on his face. I didn’t know he was live streaming. Apparently there’s not 1 person who thought what he did was appropriate. Restored my faith in society https://t.co/7PRRVFxulN

Legend. Absolutely everyone on Twitter was backing him too:

@theskylerstone i think the world needs more men like you. You not only stood up for your daughter, but you stood up for women who get cat called everyday. Props man❤️

Wow. Huge props for not beating his ass. And you’re right he shouldn’t cat call a female no matter what age they are. That took incredible strength not to punch him🙌🏻

To be fair to Aladdin, he did release an apology video later. Not gonna give him the views but this is what he said:

In this video I want to apologise to Skyler Stone.

For the angry dad who bumped into his daughter’s abusive ex-boyfriend at the petrol station and taught him a lesson, click HERE.