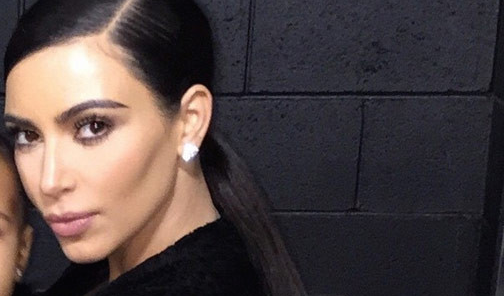 Kim K’s behaviour and vanity really shouldn’t still be surprising us as much as it is, but then she does something like this and a whole new level of hatred arises. Personally I don’t think that this is THAT bad, but hey what do I know?

Basically it all started on Sunday when Kim took a selfie with her daughter North West and posted it with North’s face cropped out, which was made even worse by the fact that she chose to include a massive nondescript wall on the other side of the picture instead of her. This led to a barrage of comments from her followers which would make you think it was one of the biggest selfie fails of all time. These included the following choice remarks:

Crop game strongggg, poor North your mom would rather showoff a brick wall than you…..SHAME!!!

Perhaps some of these are slightly harsh but you’ve got to think that some of them are justified because surely a picture with your daughter is worth more than a picture of you looking like a babe looking into a mirror, which you’ve already got about 10,000 of anyway. Apparently not, as Kim tweeted the following in response to the criticism:

Wait is this really news that I posted a selfie & cropped my daughter out? LOL

Her eyes were closed and I was feeling my look! Can I live?!?!

So there you have it. Perfectly reasonable.