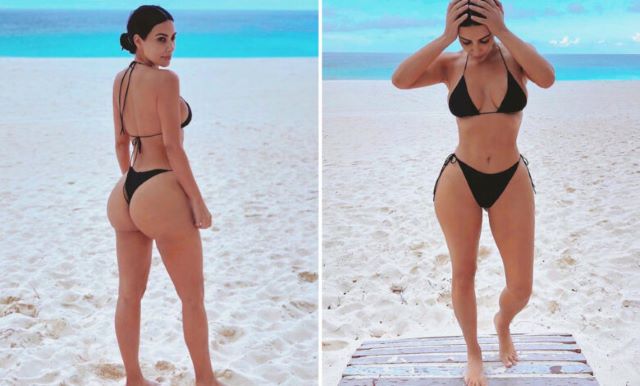 I can’t remember the last time we wrote about Kim Kardashian thirst-trapping on Instagram – it used to happen all the time – but it looks like her divorce from Kanye West and the subsequent hype around his album DONDA has motivated Kim to start Instagramming again.

Bravo, Kim! Bravo! All in a day’s work. 40 years old and clearly she’s still got it. Although to be fair, endless plastic surgery and cosmetic procedures will do that to a person.

It turns out Kim is on holiday after taking the time out of her busy schedule to attend ex-husband Kanye West’s DONDA listening party. How come she was even there, you ask? Well according to Hollywood Life, it was all Kris Jenner’s idea (of course):

According to a source, Kris, 65 was a major influence on Kim’s decision to attend the party amid ongoing divorce with West. “Kris is the main reason you saw Kim supporting Kanye at his album launch,” the source told Hollywood Life. Kim even made sure to bring her kids North, 8, Saint, 5, Chicago, 3, and Psalm, 2, to their father’s event, along with sister Khloe Kardashian. Apart from being present, Kim also made sure to twin in a red outfit with his estranged husband to shower further support for his upcoming album.

In other Kim K news, one of her ‘lookalikes’ is going to prison after smuggling millions through Heathrow airport…

🚨 | NEW: A Kim Kardashian lookalike who smuggled more than £3.5m out of the country has been jailed for two years and 10 months

She looks more like Jeff Hardy than kim kardashian https://t.co/aRxEjGoLy7

To read all about that story, click HERE. It was the largest individual cash seizure at Heathrow last year.