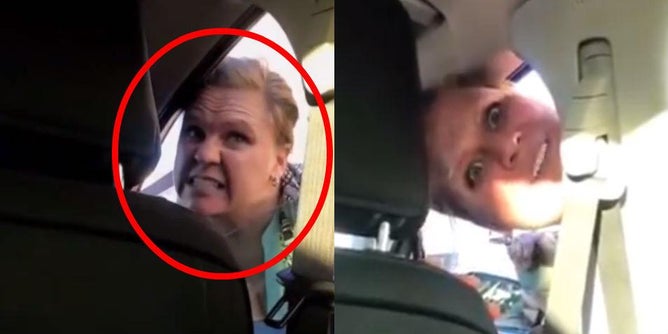 Kidz Bop, a brand of compilation albums for kids, is trending online thanks to this bizarre road rage incident featuring a lady the internet has dubbed ‘Karen’, who looks like Amy Schumer after a week-long crack bender.

I don’t know how the argument started exactly, but this terrifying woman with the craziest eyes ever comes over to confront the people in the car, sticks her head inside like an ostrich and gives them a nightmare experience the likes of which the devil would be proud of:

Sounds like she doesn’t like being told to calm down? Well to be fair telling someone to calm down in the middle of an argument never works, in fact it always has the exact opposite effect and just gets them more riled up and in this case turns the other person into an actual demon from hell.

I guess it’s easy to wind her up from the back of a cab though while the driver is sitting there apologising just to get her to go away. Should have hit the window roll-up on her.

For the road rage incident in which a man threatens to break another man’s knee caps and instantly regrets opening his mouth, click HERE.