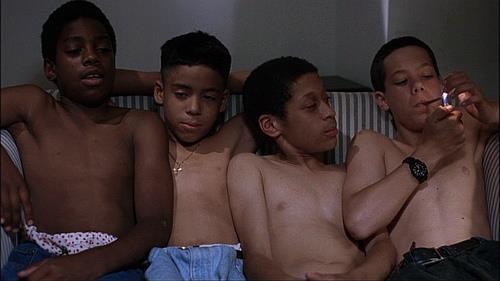 Larry Clarkâ€™s â€˜Kidsâ€™ is just one of those graphic inner-city films you have to see.

Larry Clark’s ‘Kids’ is just one of those graphic inner-city films you have to see. Kids is kind of like ‘Kidulthood’, but more authentic, less dramatised and actually has, if vague, a message behind it.

Set in the height of the HIV epidemic Kids follows a group of amoral ‘kids’ as they set about doing what New York teenage punks do best. which is doing as much bad shit as possible in a short space of time when on summer holidays, whilst drinking 40’s and skating. The protagonist, 16-year-old Telly (played by Leo Fitzpatrick) contracts HIV and whilst unaware tries to deflower as many virgins and possible whilst simultaneously spreading the disease on a mass scale, and ruining his victim’s lives. When one of these girls realises she has contracted the virus (at the age of 12) after her first sexual experience with the former, she seeks to save other girls from the same fate she has suffered with a few unexpected twists along the way.

Whilst the piece is actually pretty low budget, the characters are really well cast (Casper in particular, R.I.P.), with a few of them going onto bigger, better things: Chloe Sevigny went on to play major roles in ‘Boys Don’t Cry’ and ‘American Psycho’ amongst others after the success of her performance in Kids, for example. I guess in modernity we are all a bit more desensitized to ‘gritty’ films, but considering the year of release, this film was well ahead of its time and really provided and insight not only into city life, but the effects of HIV at the time. There was a fair amount of controversy when Kids was first released due to the topic at hand.

Kids is dark, disturbing, but also very gripping and despite the plot being very basic due to the low budget, the film keeps you glued to the box throughout. Go watch Kids right now if you haven’t yet had the pleasure.