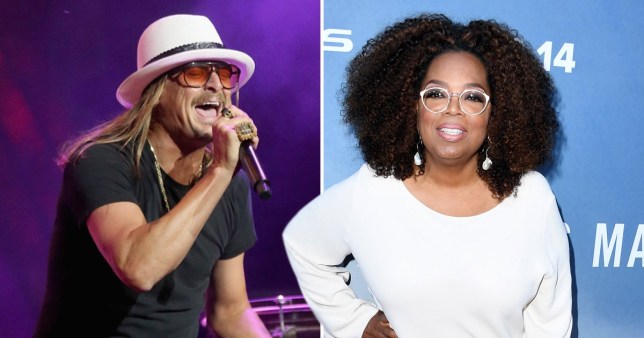 He revealed the real reason after people accused him of being racist.

Kid Rock has been hating on Oprah Winfrey for over 10 years. In fact you can go as far back as 2008 where he named her as his #1 villain in an interview with The Independent.

He told the paper:

Oprah Winfrey, she rubs me up the wrong way. I just don’t believe her. Maybe it’s because I’m not one of the 150 million brainwashed women who heed her every word.

Well fast forward to 2019 and Kid Rock is still shitting all over Oprah, telling a crowd at the Big Ass Honky Tonk Rock N’ Roll Steakhouse in Nashville (which he owns) that she can ‘suck my dick sideways’ before yelling ‘fuck Oprah’:

Because he’s never really given a reason why he hates Oprah Winfrey so much, people began to assume Kid Rock is a racist. It’s all over Twitter and you can even hear someone in the video saying “He’s racist. Look at him he’s blacked-out drunk as fuck.”

Well Kid Rock took to Twitter the other day to reveal exactly how the beef started, and it’s a pretty amazing Tweet to be fair:

My people tried to get me to do The Oprah Winfrey show years ago and her people wanted me to write down 5 reasons why I loved her and her show…🏳️‍🌈 I said fuck that and her. End of story.

Well I don’t know how true that is but if Oprah’s people really asked him to write down 5 reasons why he loved her and her show in order to be invited on then that’s pretty embarrassing. The question is can we really trust Kid Rock that it’s true?

Let’s say it is true though, I’m not sure that getting drunk and ranting about Oprah on stage is a good look for a 48-year-old American rock legend. He should have just let everyone know about this years ago instead of berating Oprah non-stop and having everyone wonder what the hell his problem is. Not that she probably even cares – too busy counting her billions and giving away free cars or whatever it is she does on her show these days.

For the time Oprah’s scholarship for black men was awarded to a white guy pretending to be black, click HERE.