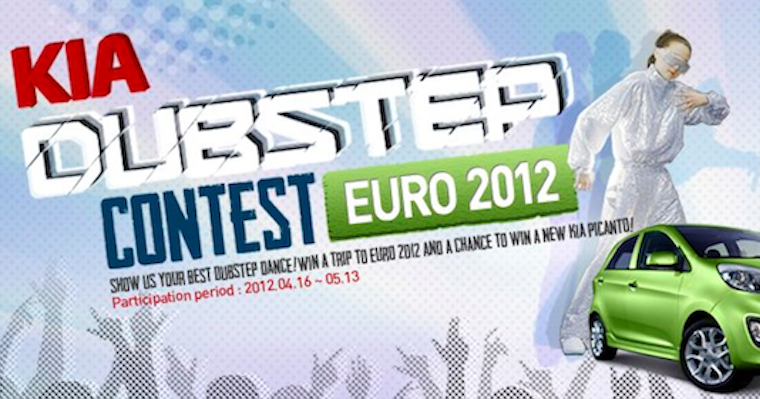 Win a ticket to Euro 2012 and a car with this awesome new competition. It also involves dubstep. Four of my favourite things.

We’re going compettion crazy at Sick Chirpse over the last couple of days, what with the competition to win tickets to Redux’s second birthday yesterday and another competition today that can get you to win one of the best prizes i think we’ve ever been involved in – tickets to Euro 2012! 8 lucky winners will win flights, accommodation and tickets to the pening match of Euro 2012 in Warsaw, and one grand prize winner will also win a Kia Picanto. You would think that the tickets for Euro 2012 would be a better prize than a new car but I guess not.

To win the competition, it’s not simply as easy as following us on twitter or facebook unfortunately. KIA have teamed up with another Sick Chirpse favourite – dubstep – to create a totally unique competition. You basically have to film yourself dancing to th the dubstep track ‘I Can’t Stop’ by DJ Flux Pavillion and film yourselves dancing to it. Kinda like the Weetabix dubstep advert we posted about a couple of weeks ago.

This is such a good prize that I when I told Slatz about it he decided to have a crack at it himself. Slatz is one crazy dude so I knew I had to hit him up about it as soon as I heard about it because I knew he might just have what it takes to win. In case you didn’t know, Slatz is a great dancer and ever since he’s been a little kid he’s dreamed of going to a World Cup or European championship game so it seemed like the perfect match up of his two main skills or something. He just filmed it on a webcam in his bedroom – it was that easy – although you’re gonna have to pull something special out of the bag if you want to beat him after this performance. Here’s the video:

The competition also finishes this Sunday so make sure you get those dancing shoes on pretty sharply.