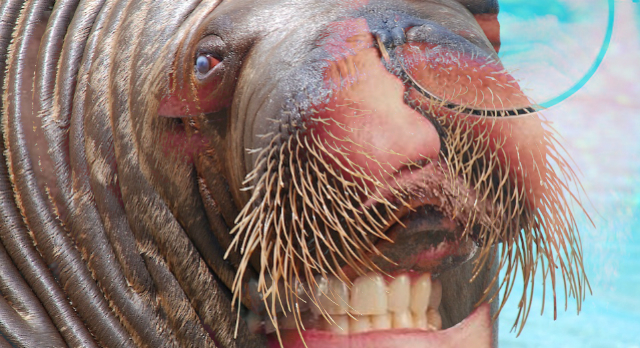 Kevin Smiths latest film is based on a creepy Gumtree post about someone wearing a walrus suit and acting like a walrus instead of having to pay rent.

A couple of months ago, a guy posted an advert on Gumtree looking for somebody to rent a room in his house in Brighton, he didn’t want any money from his new lodger, just for the lodger to wear a life sized walrus costume and to walk, talk and eat like the real thing for two hours a day.

We covered this at the time HERE but in case you missed it, the advert said:

“I have, over the last few months, been constructing a realistic walrus costume, which should fit most people of average proportions, and allow for full and easy movement in character.

To take on the position as my lodger you must be prepared to wear the walrus suit for approximately two hours each day (in practice, this is not two hours every day – I merely state it here so you are able to have a clear idea of the workload).

Whilst in the walrus costume you must be a walrus – there must be no speaking in a human voice, and any communication must entail making utterances in the voice of a walrus – I believe there are recordings available on the web – to me, the voice is the most natural thing I have ever heard.

Other duties will involve catching and eating the fish and crabs that I will occasionally throw to you whilst you are being the walrus.

With the exception of this, you will be free to do whatever you choose, and will have a spacious double room, complete run of the house.”

â˜› More Kevin Smith: Jay And Silent Bob Got Old And It Sucked

The thing is, this story doesn’t end here.

But no, Kevin Smith read this advert and has almost understandably seen the perfect format for a horror film. The question is, which direction will he go in? Will the homeowner capture people and torture them into becoming walruses for his perverted pleasure? Sticking blubber to their skin one slab at a time and attaching tusks to their faces. Or will he go down the I’ve-created-a-monster avenue? The new lodger loves his new persona so much that
he decides to roam the streets at night pretending that people are delicious penguins.

Filming is to begin this September and it should be at next year’s Sundance Film Festival, around six months from now. The film will be in a classic 70’s Hammer Horror format and will be called Tusk.

If you’re wondering, the position WAS filled, no news as to who signed up or if they are still alive.

How far would you be willing to go to not pay rent?