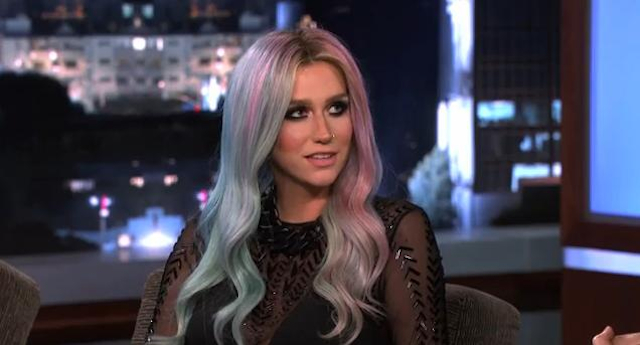 She went on Jimmy Kimmel so that she could explain this to the whole world. Seriously.

Ke$ha was on Jimmy Kimmel over in the States the other night and started talking about the aftermath of having sex with a ghost. Yeah, I’m not sure why we didn’t mention this at the time because it was suitably stupid, but last September she revealed that she had had sex with a ghost a couple of times.

At the time, this is what Ke$ha said: ‘I’ve got a song called ‘Supernatural’, that song was about having sex with a ghost. I lived in this flop house at Rural Canyon and there was this weird energy that lived there, and it used to keep me up at night and wake me up. And it progressed into this dark, sexual spirit. It did scare me but that’s part of the fun of it.’

Ke$ha was on Kimmel plugging the new series of her reality TV show, when they started discussing the first episode in which she has to get her vagina exorcised by a team of experts because it has a bunch of ghosts living in it now after their sexual escapades. That seriously happened and makes up the plot of a reality TV show. Seriously.

Here’s what Ke$ha had to say about it: ‘I know it sounds ridiculous… but I was told I have dead people in me. I got a ghost meter to read my vagina and it beeped. I’ve been going through a dry spell.’ (!!!)

I don’t know where to start with that. On the one hand it has got everyone talking about Ke$ha and her reality show which is probably what she wanted but on the other it’s so unbelievably stupid nobody can really take it seriously. In fairness Ke$ha is massive, but I wouldn’t want to be that massive having built my own personal brand on being a complete and utter moron.