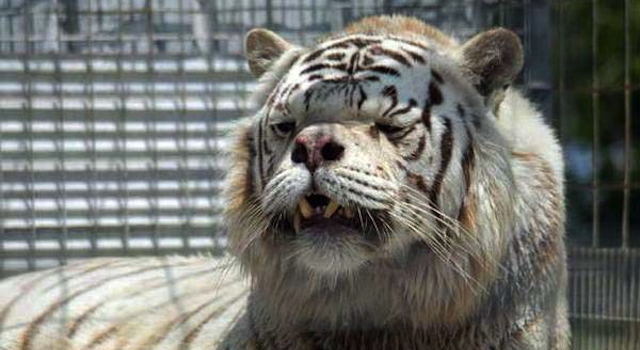 Breeders over in America are trying to create the perfect tiger via inbreeding, but all it’s succeeded in doing is creating retarded tigers.

However you look at this story, it’s 100% messed up and not cool.

Apparently over in America, tiger breeders are ‘selectively’ breeding tigers by making them mate with their brothers and sisters in a limited gene pool. I’m not sure what the mentality behind this is or how anyone can call this legitimate behaviour, but the breeders think that this could create the perfect white tiger – blue eyes, large snout and white fur – by only allowing perfect specimens to mate with each other, even if they’re related.  White tigers are all the rage now and so this is a new technique designed to satisfy profits and boost demand.

Unfortunately though it hasn’t worked at all. Any idiot could probably have told you that though because inbreeding is completely and utterly messed up and everyone knows that. The results of the experiment have left us with Kenny, who is actually considered to be the first tiger with Down’s Syndrome. He’s mentally challenged and has severe physical limitations.

People (tiger breeders) are messed up and this shouldn’t be allowed to happen. You can watch a video of him living his life below. I don’t know why whoever made it decided to put some stupid country song on it because it completely ruins the poignancy of it. I’m guessing they were probably tiger breeders and thought this was really funny. It’s not.

â˜› More  Tigers: Depressed Chinese Dude Offers Himself As A Meal For Tiger