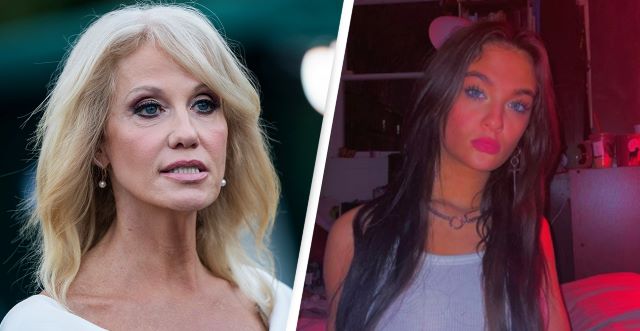 Former Trump spokesperson Kellyanne Conway has been accused of leaking a nude photo of her 16-year-old daughter Claudia, who has in the past accused her mother of being ‘physically, mentally, and emotionally abusive’.

Kellyanne apparently shared the image onto Twitter, but it was quickly deleted. A whole bunch of people who saw it immediately alerted Claudia while she was live on TikTok:

Kellyanne Conway posted her minor daughters nudes. Let’s talk about why tf those were on her phone to begin with, or the fact that is distribution of child pornography. The lasting psychological effect this will have on her daughter…go to hell, @KellyannePolls pic.twitter.com/u4xzn3wDxN

The picture’s from months ago and I’m assuming that when my mom took my phone, anytime she’s taken it, she takes it all the time, she took a picture of that so that was on her phone and I guess she accidentally posted it or somebody hacked her, but nobody would ever have any photo like that ever.

In another video, Claudia said:

So, Kellyanne, you’re going to f*cking jail. I’m shaking. I don’t know what to do. Nobody would ever have that photo. Ever. It was on my phone. I don’t think I’ve ever sent it to anyone.

So, I’m assuming that my mom took a picture of it to use against me one day and then somebody hacked her or something because there’s no physical, possible way that anybody would have that photo of me.

My mom deserves to go to jail. That’s unreal

Damn, you know the beef is real when she’s addressing her mum by her first name. As we know, Kellyanne was Trump’s spokesperson, but funnily enough, her husband, George Conway, founded the Lincoln Project, a conservative committee dedicated to preventing the re-election of Trump.

Stuck in the middle of that relationship is young Claudia, a social media-obsessed angsty teen who is aggressively anti right wing. So I guess it was always going to be a bit complicated when your mum is Pro Trump and your dad is anti Trump and somehow you hate your dad as well, as suggested by this old Tweet of hers from August 2020:

as for my dad, politically, we agree on absolutely nothing. we just both happen to have common sense when it comes to our current president. stop “stanning” him

I actually feel bad for Claudia being wrapped up in this shit show for so many years and seeing it continue even now that Trump is out of office. I mean you’d think Kellyanne might use her newfound free time to sort out her family dramas but nope, looks like it’s only getting worse.

I don’t know what’s going to happen with this situation involving her allegedly leaking her daughter’s nudes, but it’s not the first evidence of abuse from her mother Claudia has shared online over the years:

Claudia Conway shares videos exposing her mother former Trump counselor Kellyanne Conway verbally and physically abusing her. Claudia said in a comment CPS won’t do anything because her parents are too powerful. pic.twitter.com/dAaBrXm9xU

Blimey. I think we can all agree that’s not a very nice way to treat your daughter, no matter what your political leanings are. Will there be repercussions for Kellyanne Conway now that Trump can no longer protect her? We’ll have to wait and see.

To watch a granddad cuss out his granddaughter after she exposed him as a racist on Facebook, click HERE. There’s her out of his will then.