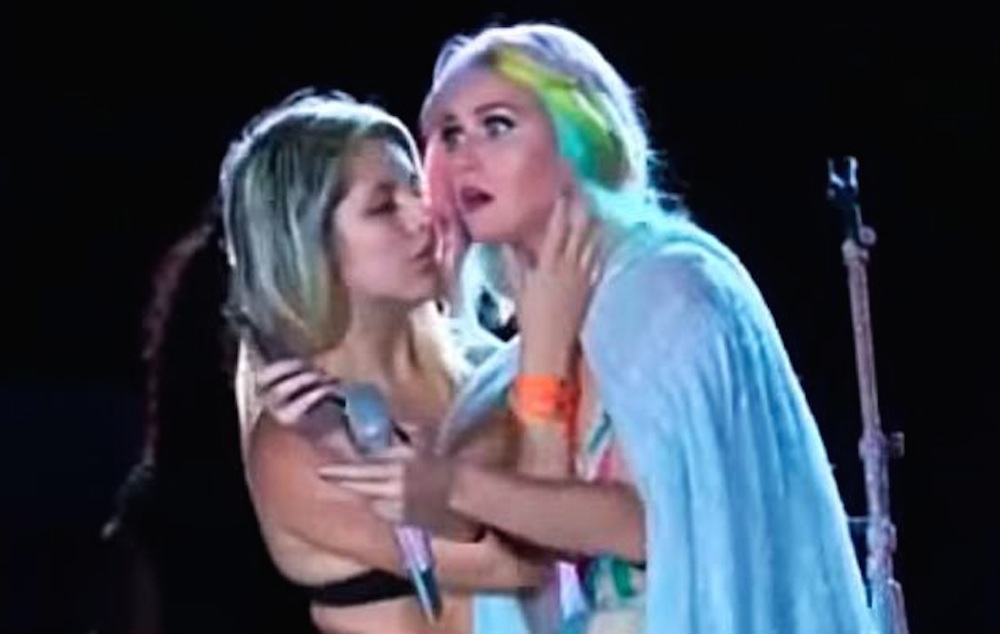 The smiley faces on her boobs backs up the fact she was completely off her tits.

Over the weekend Katy Perry was down in Brazil to perform at Rock In Rio. Not quite sure why she was playing at Rock In Rio but hey, that’s not really that relevant to this story so we’ll just ignore it.

Anyway, as I assume is the case with most of her gigs, she invited a fan up on stage to hang out with her and shoot the shit for a bit, and this time she chose a girl near the front who was wearing a top with smiley faces on her boobs. If that wasn’t a warning sign for what was about to happen next I don’t know what was but Katy did it anyway and had to deal with the consequences.

That’s because from her behaviour, it looks as though the girl is completely off her face on some super strong Es by the way she’s acting during her nearly four minute stint on stage. She repeatedly gropes Katy Perry and tries to make out with her and then gets a selfie with her, before engaging in some inane conversation with her where she teaches Katy that the Portuguese for pizza is actually just ‘pizza’. Pretty sure that works in any language to be honest.

For what it’s worth Katy realises that the girl is completely fucked up – informing the crowd that ‘she’s rolling’ and ‘needs some water’ but I suppose once you pick the girl on ecstasy to come up on stage with you, you’ve really got to roll with it yourself until the ordeal is over.

Wow, that was awkward. Still, fair play to Katy for styling it out and not just kicking her off stage straight away. We all know how painful it can be to talk to someone on ecstasy when you’re not (or even when you are), so I think we can all sympathise with how annoying this must have been for her.

Here’s a selfie form the incident which makes me think that girl is 100% rolling her tits off:

Looks like Katy is having a really great time, almost as much fun as when her backing track failed and she actually had to sing live.