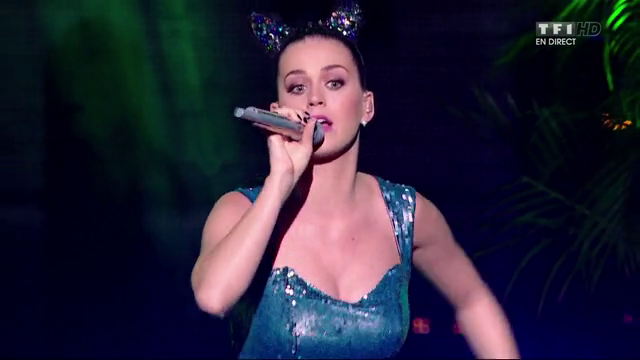 This is every pop star’s worst nightmare. Did she manage to pull it off? What do you think?

Katy Perry was performing her hit song ROAR at the NRJ music awards in Cannes over the weekend when suddenly the host of the music show jumps up on stage and interrupts her because the backing track was broken, which meant that the vocals being played weren’t matching Katy Perry’s lip movements. Awkward.

The host – who seems like a bit of a dickhead to be honest – suggests that they start again without the backing track and to be fair Katy Perry doesn’t seem too nervous or anything and actually goes for it. Whilst the end result sounds nowhere near as good as the first, it doesn’t exactly sound like the train wreck you might consider it to be when you think about how many pop stars can barely actually sing when they’re forced to actually give it a shot. She actually attempts the dance moves whilst actively singing too, which is commendable.

However, on the other hand she is paid millions of dollars to be a professional singer so should probably be able to do something like this in her sleep. Still, it could have been a lot worse. Following footage of the incident going viral, her management issued the following (totally believable) statement pretty much stating that Katy Perry was always meant to sing live but the NRJ awards accidentally started playing a ‘bad soundtrack’ at the start of her song. Of course that’s what happened, how stupid of us:

‘Katy Perry sang live during the NRJ Music Awards in Cannes on Saturday night, but unfortunately a bad soundtrack was accidentally launched, taking over the live performance of Katy at the beginning of the delivery tube of the ‘Roar,’” a statement read, translated from French to English by Google Translate. “TF1 and NRJ present their apologies to Katy Perry … for this technical problem beyond our control’