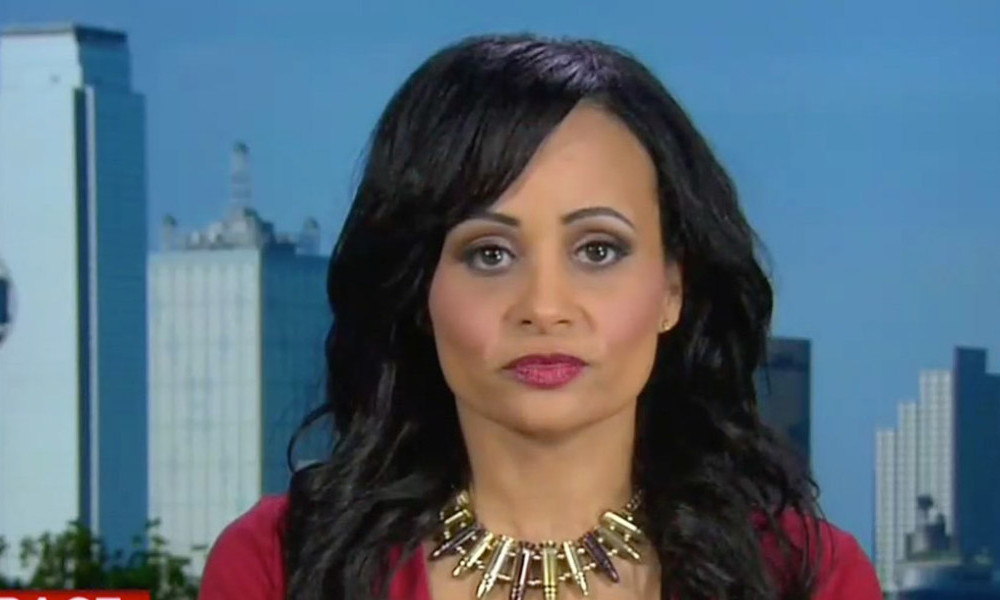 Literally bullets on her neck. America is doomed.

Is this where America’s political right is in 2016? Wearing bullets round their neck on live TV, telling us in no uncertain terms that we should just be happy it’s not a foetus, or as she puts it, ‘a fetus’? Christ alive, Trump winning the presidential election really would be the end of the world as we know it. It’s a good thing he’s been disqualified (sort of) from becoming US president.

Back to the his spokeswoman, Katrina Pierson. She went on CNN recently and viewers couldn’t help but notice the gun-themed necklace she was sporting. After the TV appearance, CNN’s chief national security correspondent Jim Sciutto, who had conducted the interview, followed up on Twitter and asked if there was a message behind the ammunition choker.

Here’s what she said:

Ridiculous sentiment, but then who are we to judge? Support your local business owners is a weak excuse for the case of the proliferation of guns in the US though.

Not everybody on Twitter was so enthusiastic about Pierson’s necklace selection.

Shannon Watts, the founder of the group Moms Demand Action for Gun Sense in America tweeted:

Katrina, being the person she is, shot back with this:

Maybe I'll wear a fetus next time& bring awareness to 50 million aborted people that will never ger to be on Twitter https://t.co/UTomoyYXLK

Of course it will be interpreted literally. Never min the point being made. Smh https://t.co/ahFgb9e0sA

Katrina previously was a Democrat, voting for President Obama in 2008, but the president’s decision not to wear an American flag lapel pin irked Pierson to the point of exploring the Republican side of politics.

She worked at various levels with Republican groups and another Republican candidate, Ted Cruz, before aligning herself with Trump.

This isn’t the last we’ve seen of the woman they call ‘Hurricane Katrina’ — that’s for sure. After all, she’s the spokesperson for a potential president that uses words like schlong, and proposes ideas like banning all Muslims — lest we forget.