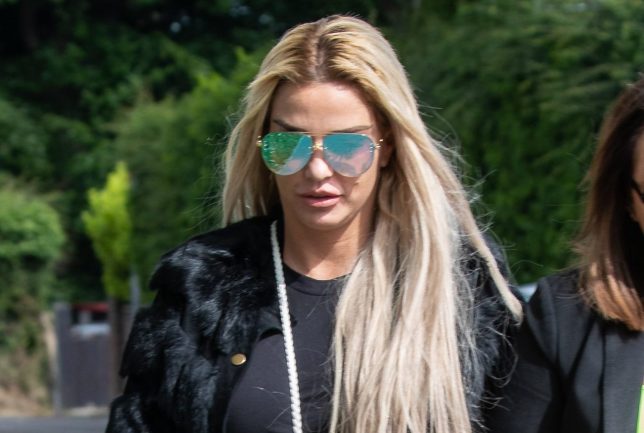 She was shouting at her ex Kieran Hayler’s girlfriend.

Katie Price seems to be more and more of a train wreck every time we hear from her these days and this trend looks as though it’s continuing with the latest news that she’s plead guilty to using foul and abusive language to her ex Kieran Hayler’s new girlfriend on the playground.

Katie had previously pleaded not guilty back in March, but changed her her plea today at Horsham Magistrates Court. She was fined £415 and banned from contacting Michelle Pentecost for five years.

Michelle had claimed that Katie had shouted ‘are you enjoying fucking my husband?’ across the playground at the primary school in Shipley last September. Both Katie and Kieran’s children attend the school and Katie became incensed after learning that Michelle was in a relationship with her third ex husband. As well as shouting that, she went on to call her a fucking cunt several times during a long tirade of abuse that was witnessed by many other families and their children.

Pretty shocking behaviour really, but then what have we come to expect from Katie Price? Absolute car crash of a woman. She didn’t seem too bothered as she paid the £415 fine on credit card and left the courthouse, delivering the following statement:

Oooh er. Maybe she could have rehearsed that a little more so it sounded a bit better. I suppose you have to feel a bit sorry for her having to discover her husband was having an affair and people do tend to go off their rockers in those kinds of situations. Should probably have tried to keep it down in front of all those children and other parents thought especially as Katie probably knew Michelle was going to be there.

Just saying all this drama could have been easily avoided, but I suppose drama follows reality TV stars wherever they go doesn’t it? They can’t really help themselves.

For more of the same, check out when Katie was recently offered £50,000 for 12 hours of sexual favours. Not so good.