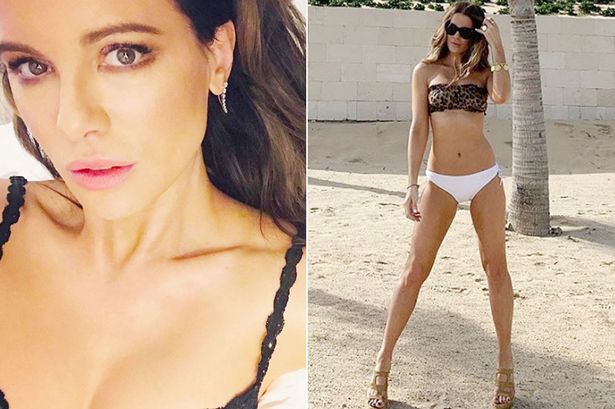 What is this troll thinking?

46-year-old Kate Beckinsale is constantly showing off her body on Instagram and why not? She obviously works hard to stay in shape and wants people to notice – fair enough.

As with any certified babe on social media, most of the comments are people offering encouragement/flattery/perversion but you always get one or two who have to be negative and in this case one ageist commenter wrote:

Shes too old..looking for attention hahahaa!!

Lazy, low-level trolling that would be easy to ignore you’d think, but nope – there must have been some sort of struggle to deal with that one comment on Katie’s part because she responded by sharing another bikini photo of herself alongside a massive caption/lecture:

Are you aware that when you get the urge to accuse someone of something, especially someone you don’t know, or attribute an intention without ever having met the person, that the only thing really being achieved is revealing something about yourself or something you fear about yourself?

I don’t know you and I don’t know who has made you feel that if you get older you have no value, can’t be attractive or sexy or have a relationship with your body that isn’t only self loathing, but as one female to another, don’t let any of that noise bother you. You’ll feel more powerful, may well physically blossom, know who you are and what you want and get good at setting healthier boundaries.

If you’re young and fearing getting older, don’t. It’s not at all how people scare you it will be especially for a woman. You’ll come into your own power in a way that feels steady and so many more things will feel possible. The people or press that are scaring you that your value is tied up in youth, or in fact anything that is not currently within your reach, is noise I do hope you allow yourself to ignore.

Sending love and the real hope you receive this message in the spirit that it’s meant. I know you have more to offer than leaving mean comments that illuminate far more about you than they do about the people you choose to comment on.

To be fair, a super accurate write-up on the troll mentality. I mean that’s really what it’s all about for them isn’t it? Getting noticed and getting a reaction. If the person they’re trolling gets angry or emotional, they treat it as a victory. But when they receive a well thought-out and articulated response like the one Kate just wrote then it makes them feel like what they actually are – nobodies trying to pick on actually successful people to get noticed.

So good on Kate for responding the way she did when she could have easily clapped back with negative energy.

Besides, what was that troll even thinking? The woman is borderline perfection:

Wow. What’s her secret exactly? Um, injecting the foreskins of Korean babies into her face, apparently.