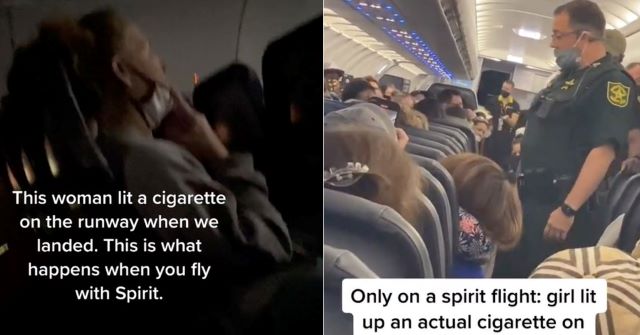 Everyone knows that the #1 rule on flights is ‘no smoking’. It’s been illegal for the longest time ever! It’s pretty much impossible to close your eyes and picture the inside of a plane without seeing those ‘No Smoking’ signs above every seat. The flight attendant even mentions it during every flight despite it being the most obvious rule ever.

Well, turns out one Karen on a Spirit Airlines flight to Florida does not give a damn, and she’s got a great excuse why – she’s ‘had a long day’:

Incredible. What’s even more amazing is that the plane had landed on the runway and this lady was basically 20 minutes away from being off the plane and able to smoke as much as she wanted. Could she really not have waited a little bit longer? I guess she’d landed at her destination and so did not think the consequences could be that bad.

According to the Daily Star, she was also a little bit tipsy:

“The woman next to her told us she had a double vodka cranberry during the flight.”

The woman was eventually escorted off the plane by Broward Sheriff’s Office Airport District deputies.

A police statement said: “On scene, deputies met with Spirit Airlines employees and were advised that they wanted a female passenger removed from the plane for smoking.”

In the end, she got away with it:

“Deputies made contact with the request, and no arrest was made.”

So she had her cigarette, was escorted off the plane and wasn’t arrested. Karen was right – totally worth the risk. Well played I guess.

To watch an idiot passenger spark a cigarette MID-FLIGHT and start smoking until other passengers snitch on him, click HERE. Bet he got away with it and all.