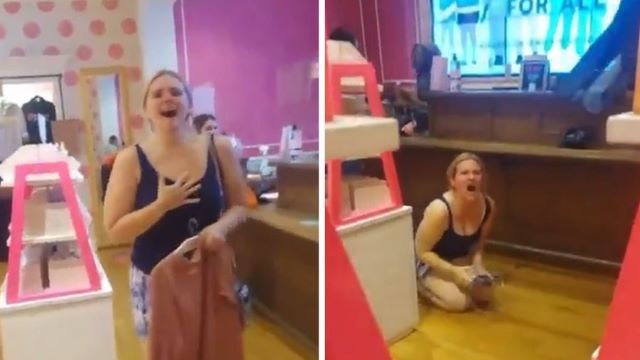 A woman who’s being labeled ‘Victoria’s Secret Karen’ had the meltdown to end all meltdowns after breaking down in tears and pretending to pass out as she was recorded by another woman.

According to the woman holding the camera, Ijeoma Ukenta, the lady attacked her right before she started recording, and then tried to act as though she was the one who had been attacked.

The footage is absolutely insane – make sure you check out the bit at 2:45:

It’s actually bonkers that there are people like this walking around in society. I mean throwing that level of tantrum in a situation where you don’t get your way? It’s unbelievable. Seriously, think about what it would take for you to actually lay down in the middle of a shop floor, pretend to pass out, start shaking like D-Von Dudley after going through a table, and have a very public meltdown on camera. OK we don’t know the exact details of their confrontation but there’s no way it was that bad for her to react like this. Not that the other lady cracking up laughing in her face helped matters, but can you blame her? It’s just such ridiculous behaviour.

The funniest part is this from TMZ:

Police eventually showed up, and the woman reportedly told police she was upset about the recording because she was worried the video would be shared online — it has gone viral — and she might face repercussions … such as potentially losing her job.

She was “worried the video would be shared online”, and so decided to behave in a way that would guarantee it would be. If she had just stood there quietly and not done anything, it wouldn’t have been worth sharing. Come on Karen, use your brain for me one time!

In the end neither woman was arrested, and were just asked to go their separate ways and get on with their lives. Pretty fortunate considering that voice alone should warrant a life sentence in prison.

To watch the first trailer for the upcoming ‘Karen’ horror movie dropping later this year, click HERE. It’s… something.