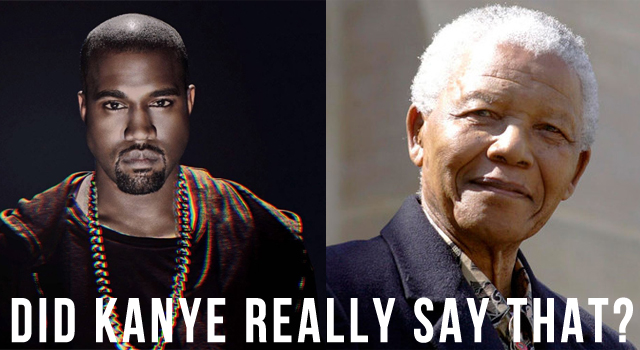 Kanye West’s latest interview has sent the internet into another meltdown, but is there more to it than there first appears?

Although the thought of Kanye West spending 27 years in prison would probably be almost universally embraced by everyone in the world, Kanye isn’t actually referring to that part of Nelson Mandela’s life story when he made the typically brazen and completely unfounded comment over the weekend. Or did he?

It is actually completely believable that Kanye West might say something along those lines – he’s recently compared himself to Beethoven, Steve Jobs and God – but it was actually the work of satirical US website The Daily Currant, who ran a fake interview with Kanye in which he described himself as being the next Nelson Mandela. The exact quote from the interview follows and to be fair again it does sound like the trash that would come out of Kanye West’s mouth:

‘I am the next Nelson Mandela. I’m only 36 years old, and when I look at everything I’ve accomplished, it’s the only comparison that makes any sense. By the time I’m 95, I’m going to be a bigger hero than he ever was.

‘Nelson Mandela did a lot of good work, don’t get me wrong. But I think I’m on track to do something even bigger. I liberate minds with my music. That’s more important than liberating a few people from apartheid or whatever.

‘Not to say Mandela wasn’t for real. I have mad respect. I just think we need to keep things in perspective here. Anyone can be replaced. And I think I’m well on my way towards being the next great black leader. I’m already worshiped around the world. And there’s more to come.’

“What have you actually done for civil rights?’ asked ‘host’ Adrian Cronauer. ‘Have you been involved in any campaigns? Any political activities? It seems to me comparing yourself to Mandela is a bit of a stretch.”

‘I’ve blazed a trail with my career, I faced immeasurable racism when I entered this profession. I mean how many black rappers can you name that came before me? I was a pioneer. And now I’m doing the same thing in the fashion world.

‘Not to mention I have a bigger market than he ever did. Mandela was working in South Africa, which has, like what, six people? I started my magic here in the USA and then I took my business global. Worldwide baby.

‘I just want everyone out there to know. I see y’all crying on the TV. Being all sad. Just know that Kanye’s gonna carry on Mandela’s legacy. There’s nothing to worry about. I got this’.

Needless to say, a whole bunch of people thought that the story was real and it was reposted around the internet like wildfire, with two South African news websites actually posting it up as legitimate news before realising that it was a piss take. People really need to watch where they source their stories from.

Here’s some of the best tweets we could find about it (including the thoughts of Disturbed singer David Dramian):

Someone please slap or kill @kanyewest .You are the next Nelson Mandela ?? #SMD , your lyrics aren't even written by you anymore.Just die.

Kanye West has officially lost his mind. I will never support this clown. Read all the quotes please. http://t.co/LeAiPJZqiw