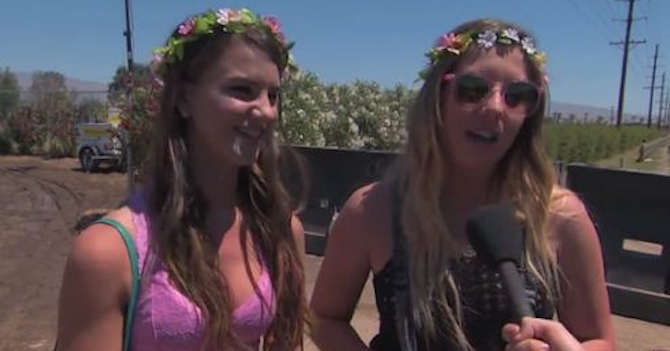 This is probably fake but it’s still pretty funny because everyone hates it when hipsters bang on about bands nobody has ever heard of. Finally they’re getting their comeuppance.

If you’re a hipster, then there’s nothing like knowing more about obscure music then the people that you’re hanging out with because it just automatically makes you that much cooler than everyone else you’re hanging out with and you can say stuff like ‘yeah I was more into them when their original guitarist was playing with them, it was just way more raw back then’ as you smoke your American Spirit rollup or take another swig of PBR or whatever.

Whenever I end up hanging out with hipsters (it’s rare) the conversation inevitably turns to music and I just sit there blankly as they talk about bands I’ve never heard of. It’s kind of boring, but I guess if you’re a hipster you don’t have a job or anything so you might as well spend your time researching music that nobody has ever heard of and then finding out loads of obscure facts about said music, so you can spend your dole money on PBR or Brooklyn lager and then hang around with other like minded people and discuss who knows the most unimportant information. It’s a way of life dude.

I’ve never really wondered if these bands are all real and these guys might be making them up or not, but it would be a pretty sick get if you made up a band and talked to a hipster about them and they just reeled off all this shit about them and how they saw them play in a launderette way back when. You know would they would just be making everything up and you would just be laughing at them in your head as you dutifully nodded along with their bullshit. It would be sick. It’s a really good idea right? I wish I had come up with it instead of this Jimmy Kimmel guy.

I don’t know anything about Jimmy Kimmel but I’m guessing he’s a late night talk show host from this video, and in fairness to the guy this is pretty funny, even if it’s probably overdubbed and fake. He basically sent some interviewer over to Coachella and got her to interview people in the crowd and ask them about a bunch of made up bands and whether they’re excited about seeing them play at this year’s festival.

Of course, Coachella being Coachella it’s obviously full of douchebag trust fund hipsters, so they’re naturally only too eager to recount how long they’ve been into said band, even when it has a ridiculous name like Get The Fuck Out Of My Pool or Dr Slo Mo And The GI Clinic. For some reason they also whacked Two Door Cinema Club in there too which I didn’t really understand!? Maybe it’s some kind of biting commentary on their music, I don’t know.

Anyway this video is pretty funny, even if it does sound overdubbed it’s still pretty jokes, I just wish I could believe it was real. My favourite is the guy who said he used to play them on his college radio show back in the day. What a dork.