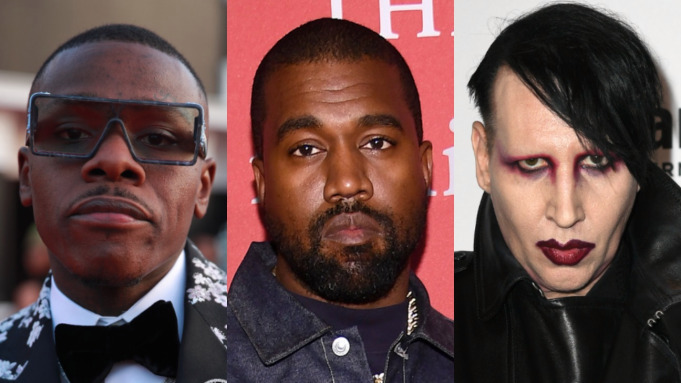 Say whatever you want about Kanye West, the guy knows how to get a reaction and this was never more apparent in his third listening party for his new album Donda last night where he brought out Marilyn Manson and DaBaby – both recent ‘victims’ of cancel culture – and then set himself on fire.

The listening party took place at Soldier Field in West’s hometown of Chicago with 40,000 vaccinated people attending. Kanye kicked off the show with one of the most popular tracks from the new album ‘Jail’, but Jay Z’s verse had been replaced with one from DaBaby instead, before DaBaby and Marilyn Manson joined Kanye on stage in front of a mock up of his childhood home.

Things then got even stranger when Kim Kardashian appeared on stage with Kanye in a wedding dress – even though the two are scheduled to divorce – before he decided to set fire to his childhood home and then sit inside it in fireproof suit that was also engulfed in stage. Symbolic, man.

How is this a completely unedited clip from the Kanye stream pic.twitter.com/2eHMusjRX2

There are no half measures with a @KanyeWest performance. #DONDA pic.twitter.com/jPrFxD5Naa

Lol what? I really got no idea what Kanye is trying to do here, I guess make some kind of comment on cancel culture and how he’s ‘burning’ his relationship with his childhood and his wife? Kind of crazy that Kim even agreed to be in it wearing that outfit considering they’re getting divorced, but maybe she was worried about him actually setting himself on fire if she didn’t or something? Highly manipulative of the guy.

Anyway, no idea what’s next for Kanye West but it seems like he’s never actually going to release DONDA and just do weird shit like this all the time and I’m totally here for it. Probably wasn’t going to listen to DONDA anyway.

For more of the same, remember the stories about Kanye West shagging Jeffree Starr? That was weird.