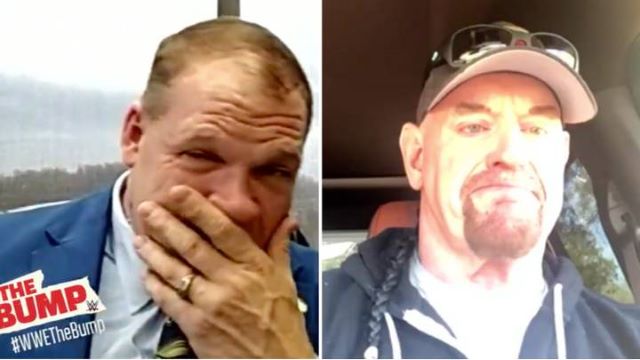 It’s almost time for Wrestlemania which means a fresh batch of WWE legends will be inducted into the Hall of Fame the night before, and it seems as though this year’s #1 inductee is going to be Kane.

Who better to break the news to him than his on-screen brother The Undertaker?

Aww, wasn’t that sweet? Can someone get over there and give Kane a hug? I’m guessing Taker will be there to induct him as well, which makes all the sense in the world given their history and battles they had over the last couple decades. Hopefully they turn the whole room red and shoot out some classic Kane pyro when he makes his entrance otherwise that would just be one big missed opportunity.

The rest of the 2021 inductees so far include Molly Holly, The Great Khali, Eric Bischoff and Rob Van Dam. Pretty solid line-up. Apparently Wrestlemania, which takes place in Tampa, Florida this year, will also have a (limited) crowd in attendance so that’ll be good to ease the crowds back into these big events and see how it goes. Wonder if Kane will have his mask handy now that he’s actually got a reason to wear it in his post-WWE life.

How good was Vince McMahon on commentary back then? Epic.

For the time Triple H got ROASTED on the Howard Stern show back in 2002 for his relationship with Chyna, click HERE.