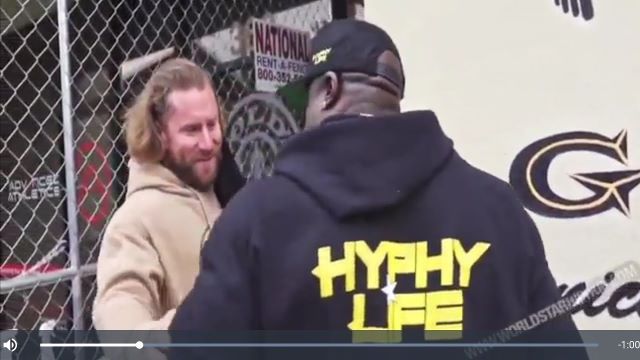 Just a bit of an overreaction.

You would think the last thing a hench bodybuilding ex-convict would need to do to look intimidating is to pull out a knife, but that’s exactly what Instagram star Kali Muscle did when a fellow gym-goer annoyed him outside Gold’s Gym this week.

Just a bit of an overreaction? Although again I just can’t wrap my head around a guy spending all that time in the gym, getting all those muscles and transforming himself into the Incredible Hulk, only to then pull a knife on a dude for committing the cardinal sin of… walking in front of the camera while he’s filming a YouTube video. Come on Kali Muscle, get a grip!

Fair play to the other dude for how he handled it. Must have realised Kali Muscle is a roid-raging meathead who isn’t capable of thinking his way around a situation and so it was all up to him to diffuse it. God that would have been such a lame thing to get stabbed over. Reckon Kali will lose his Gold’s Gym membership over it? Yeah right, this is LA we’re talking about.

For footage of an alpha male gym rat picking a fight with a kid who was lifting too hard, click HERE. What is it with these gym wankers?