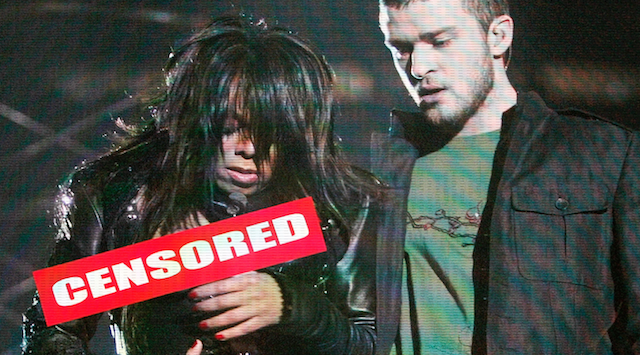 The Justin Timberlake/Janet Jackson ‘wardrobe malfunction’ might have been kinda forgotten until earlier this year when the Britney Spears documentary came out and everyone sort of reframed Justin Timberlake as a major asshole during that period and now the stylist from that incident has come out to say that it went down exactly like Justin planned it.

Timberlake was apparently eager to top the reaction that Britney had achieved a couple of months earlier at the 2003 MTV Video Music Awards where she had locked lips with Madonna and Christina Aguilera during a dance medley that the three of them were taking part in. Obviously the camera had cut to Justin during that segment as well to make his embarrassment even more prescient with everyone in the world, so he was looking for something big during the Super Bowl the following year.

Janet was going to be in a Rocha dress, and [Justin] was going to step on the back of her dress to reveal her butt in this pearl G-string but the outfit changed a couple of days before, and you saw the magic.

I wouldn’t call it a wardrobe ‘malfunction’ in a million years. It was the most functioning wardrobe in history. As a stylist, it did what it was intended to do.

Janet has already forgiven Justin in private. They made their peace a long time ago.

I guess that isn’t that surprising given the recent re-examination  of Justin Timberlake’s role in his feud with Britney Spears following their breakup, but maybe it should also be mentioned that Scot Lukas is apparently working on a book called ‘Wardrobe Malfunctions: Receipts from the Front Lines and the Front Row’ too, so it’s hardly like he’s revealing this information out of the goodness of his heart either. Make of it what you will.

For what it’s worth, Justin did apologise to Britney and Janet earlier this year, but it looks like he’s probably going to need to do a load more grovelling after this info has now come out. Tough break.

For more of the same, check out Timberlake getting slapped in the face by a fan at a celebrity golf tournament. Ouch.