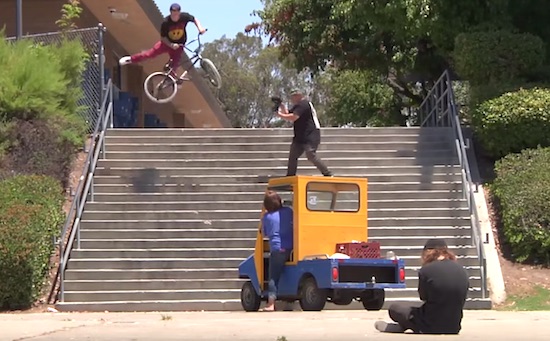 Get out of the way.

The El Toro 20 stair gap in Lake Forest, California is notorious within the skateboarding world as one of the best trick spots in the game. I’ve lost count of the number of times I’ve seen various skaters do battle with it in skate videos.

Now it’s the turn of up and coming BMX superstar 16-year-old Justin Gautreau. In the edit below he does battle with El Toro as he attempts to nail a tail whip. Unfortunately for him, some pissed off woman in a golf cart appears out of nowhere and starts yelling at him, worried about the legal repercussions of him trying all these tricks in the school and threatening to kick him off the campus.

With the pressure on, LIL JUICE has one last try before the sheriff shows up and he proceeds to nail the trick in one of the most glorious pieces of skill I’ve ever seen, right next to that bitch’s stupid golf cart:

What an annoying bitch. I hate people like that who just moan and moan and moan about ‘the rules’ when what people are doing isn’t really even breaking them or causing a problem. Stoked she got served and LIL JUICE managed to nail his trick right in front of her dumb face.

Check out this video of Chris Joslin 360 flipping the legendary Davis Gap next.