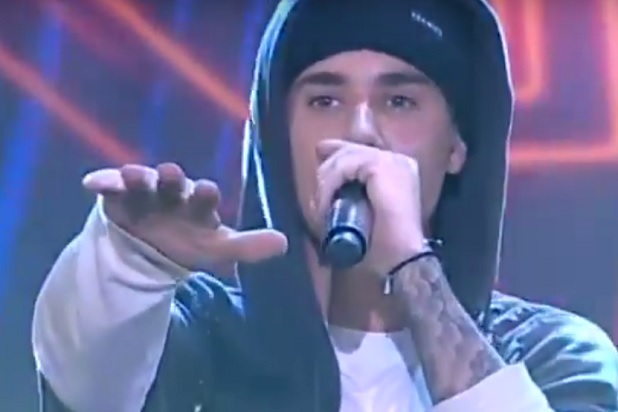 Is there a wrong way to clap?

Justin Bieber is a knob, who knew? Last week we brought you a story in which the singer stormed off stage after a fan accidentally spilt a drink then got in his way when he tried to mop it up. Well this week he’s continued his efforts to alienate the only people that don’t think he’s an grade-A wasteman, after pausing in the middle of a performance to correct the tempo his audience was clapping at.

Bieber was performing a live rendition of ‘What Do You Mean?’ in Spain, when his fans committed the unforgivable sin:

If you’re going to clap, at least clap on beat. Tehehe.

Check out the video for yourself (the bitching starts at 2:30 if you can’t separate his whining from his singing):

There are three things that really piss me off about this. Firstly, that laugh he does after he reprimands his fans, seriously, WTF was that.

Secondly, I’m no Mozart, but I’m pretty sure that the first tempo and the second tempo are both acceptable.

Thirdly, even if there is a ‘right’ way to clap to the song, who does he think he is telling them after they’ve just paid/taken the time to watch him perform? I bet he can barely even hear the clapping over his ear piece and the musician next to him, who incidentally seems to be tapping his foot to a completely different tempo, anyway. Jesus.