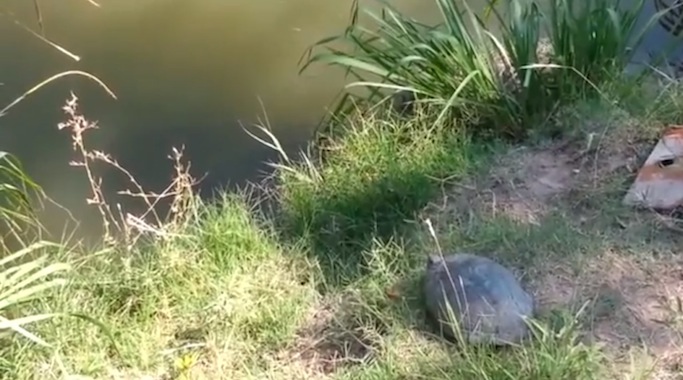 It’s Monday morning, we all feel like shit, so here’s a video to cheer you up.

The majority of the time these videos are pretty underwhelming and it usually depends on what you personally find funny as to whether you find that video of panda sneezing your mum showed you more or less humorous than the video of the woman being interviewed who is then graphically attacked by a bear your dad showed you. This video, however, is in my book destined to be up there with the greatest of them and it features none other than a rather unsuspecting turtle. This little guy must be seriously thirsty, I mean, Turtles aren’t exactly known for their ability to leap around so something must have made him? Right?

Watch Next: Really Cute Puppy Playing With A Pair Of Really Big Boobs

Is this the happiest Turtle you’ve ever seen or does he just want to get his swim on? Check it out and make up your own mind. Personally, this ranks highly as one of the best wait for it moments I’ve seen. Mainly because it involves a Turtle, which I find hilarious.