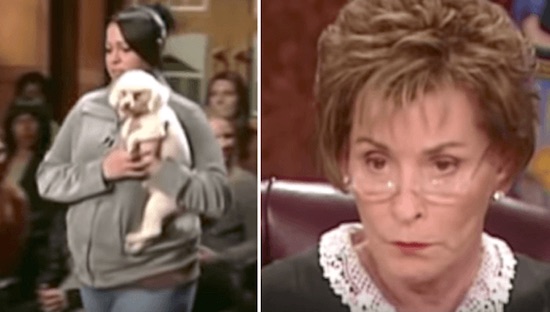 That’s why she’s the best.

Judge Judy has been handing down wisdom and advice and laying down the law for a couple of decades now, but this video might just feature the most awesome piece of decision making I think we’ve ever seen her perform.

The dispute was between two people over the legal ownership of a dog. One man claims that another woman stole his dog off him, whereas the woman reckoned that she bought the dog legally off the street from another girl entirely.

How does Judge Judy choose to settle this? By bringing the dog in to the courtroom and letting him decide who he goes home with. Absolutely genius:

Emotional. Kinda feel sorry for that other woman as she’s clearly gutted about it, but like the dude says you probably shouldn’t buy a dog for $50 outside the mall if you want it to be a legit purchase. Think about it.

Anyway, you can see why Judge Judy is the best at what she does when she makes completely badass yet completely sensible and rational decisions like that in the courtroom, even when they’re a little out of the box like that one. Long may it continue.

For more Judge Judy, check out this guy trying to explain what Grindr is to her. Awkward.