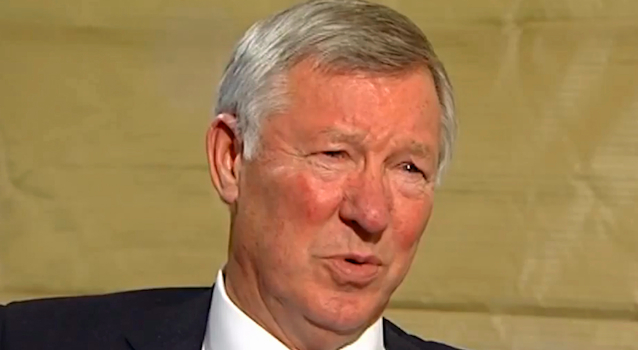 Jon Snow completely rips apart Alex Ferguson in this interview and makes him look completely vulnerable touching on subjects he would never have discussed during his time as Manchester United manager.

This has got to be one of the best interviews ever because no matter what you think of Sir Alex Ferguson (despite recognising him as a superb manager it’s been well documented that I’m not exactly a fan of him on this site here) in the last 25 years nobody has ever, EVER made him squirm and look anything like he looks in this interview. For that reason alone I find it completely incredible.

You might have heard that Fergie has been doing the rounds promoting his autobiography that just got released and looks to contain a fair few revelations about his time at Old Trafford – what really happened with David Beckham, Roy Keane, Ruud Van Nistelrooy, Rafa Benitez etc etc – and journalist Jon Snow was quick to seize on a bunch of them in his interview with him on Channel 4 last night.

Snow accuses him of being a Stalinist (!) and falling out with almost every single one of his star players, as well as examining his obsession with controlling his players and the fact that he supported a capitalist takeover of the club despite being staunchly left wing. Ferguson barely has time to breathe during the interview so quickly are the accusations and questions hurled at him and at times he looks like he’s going to cry and choke up.

It really is something to see one of the most powerful men I’ve ever seen face journalists and men of authority and not back down painted into a corner, but I guess he no longer has that air of authority that he could carry with him being Manchester United boss. I’m not sure I’m a fan of this confrontational style of interviewing in general but Snow pulls it off exemplary and I feel like people will be talking about this for a long time to come.

Whatever happens though, it’s only going to increase sales of Fergie’s book and he’s still the greatest manager of all time and nobody is going to take that way from him. I’m sure everyone who isn’t a Manchester United fan will appreciate seeing him cut down to size for once in his life though.