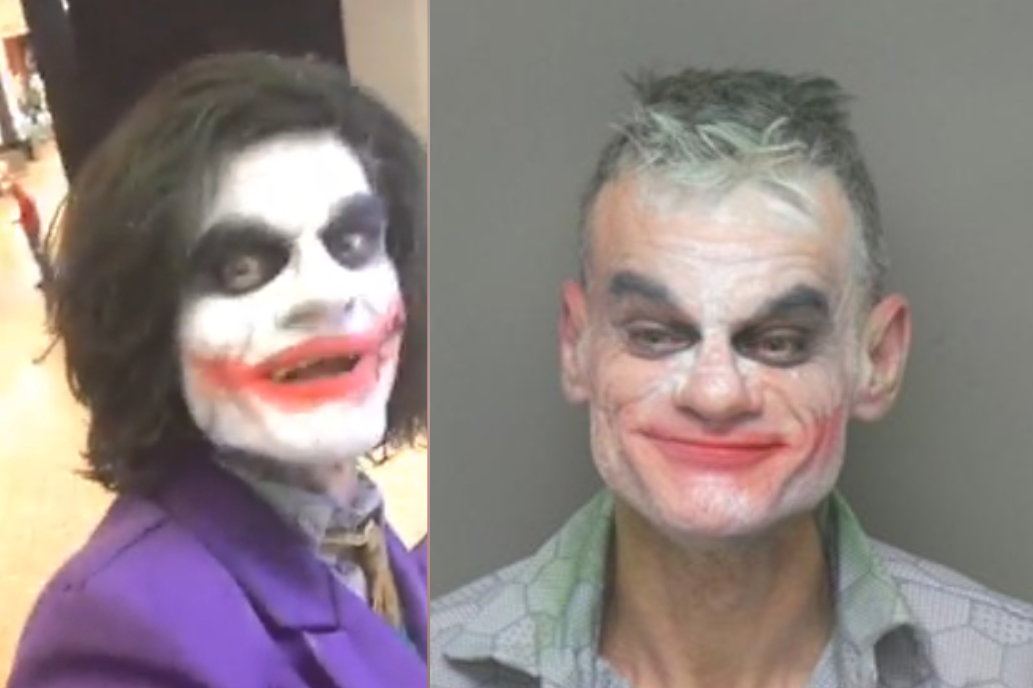 A Missouri man has been arrested on suspicion of making terrorist threats after saying some very disturbing things on Facebook Live while in full Joker costume and makeup.

Jeremy Garnier, 51, streamed for about an hour as he went around town talking about the “epidemic of opiate addiction and heroin overdoses” and saying his mission is to raise awareness about it (while dressed as Joker for some reason).

At one point, he enters a shopping centre and a guard asks him to leave because his face is covered. Garnier tells the camera:

The reason I have your attention is to end the epidemic of opiate addiction and heroin overdoses which are plaguing our society. It’s the leading killer of people under 50 years of age. When you share this video let them know that The Joker ain’t joking around when it comes to serious addiction. You need to leave that stuff alone, inspire the children not to do it, you know what I mean? And … kill a few people while you’re at it.

Garnier then goes to a bar and orders a Sprite, telling the bartender:

I can’t be inebriated when I’m planning on killing people.

Well soon after that police showed up and arrested him for making a terrorist threat. According to The Washington Post though, this guy has over 12,000 fans trying to raise money for his legal defense, saying he was obviously joking and it was part of his Joker act. Which is probably true but doesn’t really excuse the brainlessness of joking about mass murder while dressed as one of the scariest villains of all time.

You can watch his livestream below:

I guess Garnier thought he could raise more awareness about the opiate/heroin crisis going around threatening to kill people while dressed as Joker than he could by starting a blog or writing to his MP or whatever. Maybe next time he could shoot a TV host live on air to raise awareness for coronavirus? Totally worth it as long as people get to know.

In all seriousness though, anybody who goes around in public dressed as Joker should probably be thrown in jail. No one wants to wait around to find out if you’re ‘joking’ or not – it’s just too terrifying.

For the man who yelled ‘Allahu Akbar’ during a screening of the Joker and caused all hell to break loose, click HERE.