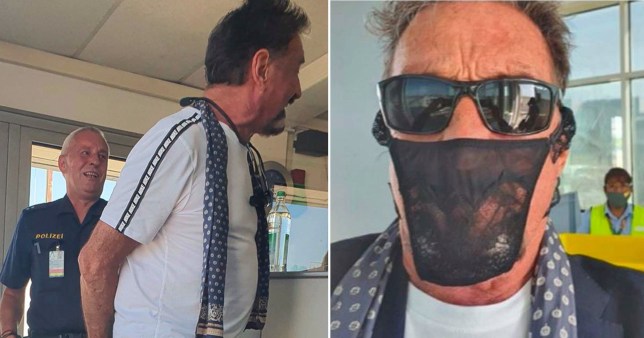 John McAfee is at it again.

There’s never a dull moment in the life of tech tycoon John McAfee, and the 74-year-old antivirus millionaire has proven it again this week by managing to get himself arrested after refusing to take off his thong face mask at the airport.

Here’s the story in 10 Tweets (taken over halfway through by John’s wife Janice McAfee – since he was busy being detained and all):

You may bring up to two guests.

Since it is Summer, red shirts will be acceptable.

If you are not a Society member but can figure out our locale, you are also welcome.

I am being detained in Norway.

Trivial issue but waiting for high level beaurocrats to arrive.

Slow bastards, as you know.

Our trip so far: pic.twitter.com/BJV76g8k4g

My Coronavirus mask is the problem.

I am insisting it is the safest available and I’m refusing to wear anything else — for my health’s sake.

Going to have to cancel the Red Scarf Society meeting.

I am so sorry.

Always joke with you captors. No matter what. pic.twitter.com/aKgq65Fjqx

It doesn’t recycle his exhaled carbon dioxide, like over the ear masks.
(Breathing impaired people are exempt from wearing masks because masks impair respiration).

He was arrested for what he believes.
Thank you my love. pic.twitter.com/Vm7ZjyR6bz

He was not arrested for wearing the thong as a mask. He was arrested for refusing to replace it with a “medically certified” over the ear mask.

I refused as well. But they chose to arrest John, and leave me be.

Jail would be more fun. pic.twitter.com/f1orfZwjPV

Here I was 2 hours ago. John is the only person I know that can get you champagne while being detained!

I’m back in Belarus and, with the exception of a black eye, no worse for wear.

I cannot speak publicly about my fun and games yesterday, regrettably, but after a few hours sleep I will be back with my usual stream of conscious:)

Good to be back. pic.twitter.com/DXdLP8kD5b

I was jailed:
Why?
Visited Catalonia just before Europe banned Catalonians from travelling.

Tried to return to Germany and were refused entrance. They demanded we wear masks.

I put on my thong mask.

They demanded I replace it. I refused.

As you might have guessed – John McAfee is an anti-masker. Which I guess isn’t too surprising although you’d think someone who’s famous for creating literal antivirus software would know better. Thought I guess he’s always been a bit of a lunatic and clearly even at 74 doesn’t feel as though he’s too old to be getting himself in trouble.

Then again I’m not messing with anyone who got off a murder charge in Costa Rica, not to mention all the other drama he’s been involved in. Remember this weird video?

If you haven’t seen the John McAfee documentary called ‘Gringo’, I suggest you make time to check it out. It’s exhilarating.