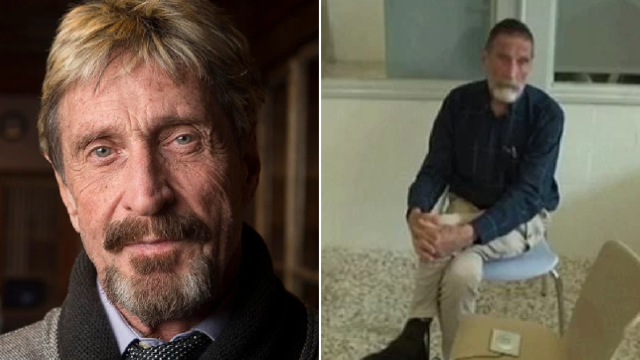 Nothing to see here.

The official autopsy report on John McAfee is out, and unsurprisingly the ruling is that the 75-year-old tech mogul killed himself in his prison cell in Barcelona.

Given McAfee’s repeated assurances that he would never kill himself, it’s not news that many people will be willing to trust…

Getting subtle messages from U.S. officials saying, in effect: “We’re coming for you McAfee! We’re going to kill yourself”. I got a tattoo today just in case. If I suicide myself, I didn’t. I was whackd. Check my right arm.$WHACKD available only on https://t.co/HdSEYi9krq🙂 pic.twitter.com/rJ0Vi2Hpjj

The food is good. All is well.

Know that if I hang myself, a la Epstein, it will be no fault of mine.

Regardless, that’s the official ruling coming out of Spain. Prison wardens found McAfee hanging in his cell last Wednesday, according to his lawyer Javier Villalba. Apparently a suicide note was also discovered in his pocket.

His widow Janice McAfee has demanded a ‘thorough investigation’ of his death, saying her husband did not appear suicidal when they last spoke. Janice wants ‘answers about how this was able to happen.’

His last words to me were “I love you and I will call you in the evening”.

Those words are not words of somebody who is suicidal.

McAfee was arrested at Barcelona airport in October 2020 on a warrant issued by prosecutors in the States, who wanted to jail him for 30 years for his alleged evading of more than $4 million in taxes. Before he was found dead, the courts had ruled he would be extradited to the US to face the music.

That’s why I’m on the fence a little bit with this one. Yeah OK McAfee may have made a big deal about how he would never kill himself and that if he were to be found ‘Epstein’d’, there would be foul play involved. But at the same time, this is a guy who would play Russian Roulette for fun and had even (allegedly) killed a guy once and got away with it. You might say he was never charged for that but he sure did pay a lot of hush money to the victim’s family to make them go away, which I’m not sure an innocent person would do. Basically – the guy was a little bit off his rocker.

Not to mention, having lived an amazing life full of sex, drugs and partying and made it to 75, the idea of living out the rest of his days in prison must’ve sounded like a nightmare. Why stay alive at that point? Might as well just top himself, as it was all downhill from there. Plus he gets the thrill of knowing (well, as much as a dead guy can know) that his death will forever be shrouded in conspiratorial mystery. Just my take on it, but of course, anything is possible.

For a cool video McAfee released on his time in Belize, click HERE. Dude lived a hell of a life.