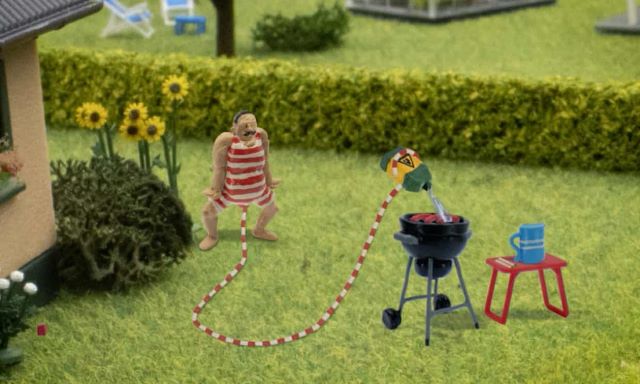 The Danish equivalent of the BBC, DR, this week aired the first episode of a new animated series aimed at 4 to 8-year-olds about John Dillermand, the man with the world’s longest penis who overcomes obstacles and challenges in his life using his gargantuan genitals.

As per The Guardian, John Dillermand uses his penis to perform rescue operations, light barbecues, etch murals, hoist a flag and even steal ice-cream from children. Dillermand literally translates to “penis-man” in Danish.

As you might expect, the series has been met with backlash from people who are concerned about exposing kids to an adult male with a long penis (even in animated form).

Is this really the message we want to send to children while we are in the middle of a #MeToo wave?

Christian Groes, an associate professor and gender researcher at Roskilde University, is worried the show’s celebration of the power of male genitalia could set equality back:

It’s perpetuating the standard idea of a patriarchal society and normalising ‘locker room culture’ … that’s been used to excuse a lot of bad behaviour from men. It’s meant to be funny – so it’s seen as harmless. But it’s not. And we’re teaching this to our kids.

Oppositely, Erla Heinesen Højsted, a clinical psychologist who works with families and children, reckons the show’s critics may be be overreacting:

John Dillermand talks to children and shares their way of thinking – and kids do find genitals funny.

The show depicts a man who is impulsive and not always in control, who makes mistakes – like kids do, but crucially, Dillermand always makes it right. He takes responsibility for his actions. When a woman in the show tells him that he should keep his penis in his pants, for instance, he listens. Which is nice. He is accountable.

DR responded to the criticism by saying it could just as easily have made a programme “about a woman with no control over her vagina” and that the most important thing was that children enjoyed John Dillermand.

Not sure that’s a great comeback because the first point makes no sense and the second point is pretty irrelevant. Of course kids are gonna enjoy a show about a funny-looking man with an uncontrollable penis!

Is it really something to worry about though? Check out the first episode for yourself:

Lol. Seems like something that would air on Adult Swim, not on the Danish equivalent of the BBC. Loved the bit where he lures a pack of lost dogs onto his truck using his lengthy member. Just the sort of thing 4 – 8-year-olds will be rolling on the floor cracking themselves up over!

In fairness to DR, they do have a history for airing controversial cartoons. Another popular Danish cartoon character is Onkel Reje – a weirdo who curses, smokes a pipe and skips baths, and Gepetto News features a cross-dressing character.

So what’s next for Danish cartoons then? Alice & her massive phallus in Wonderland? A Mr Penis addition to the Mr Men franchise? Looks like DR is happy to test the limits of what is acceptable for children’s television. There has to be a line somewhere though – who gets to decide what it is?