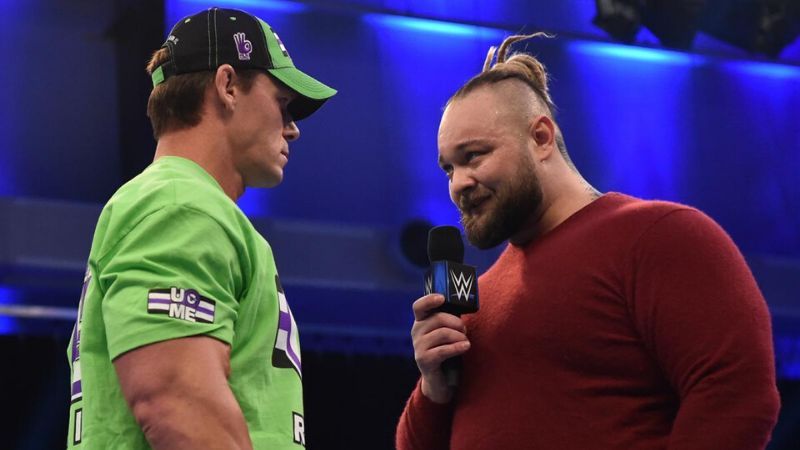 This is too funny.

Coronavirus is affecting everything that’s going on right now with many sporting events and large gatherings being completely cancelled because of it.

The WWE is one organisation that is kinda continuing to happen though, only the wrestling matches are taking place in empty arenas without the live audience and boy is that making a difference. I hadn’t really ever thought about just how intrinsically important the crowd cheering and booing for each wrestler is to the whole spectacle but if you watch Bray Wyatt trash talking John Cena below then you’ll realise just how integral they are to the spectacle:

Thoughts on this segment to an empty audience

Lol. I know that wrestling is all fake and scripted, but it’s really weird/funny seeing these two grown men yelling at each other in an empty arena with nobody there. Makes you think just why these guys feel the need to come down to this empty place and stand around beefing with each other. Really dumb.

Here’s a few of the best comments about it on Twitter:

Wow the pathos to this is actualy really compelling.

This is some crazy slam poetry.

why tf is he talking to himself?

Lol, they look ridiculous.
Well, more so than usual.

I know nothing of the WWE Universe. idk im guessing its kinda like Marvel universe in my mind but real life? My thoughts… they seem to have great chemistry and i cant wait till they kiss. The man is baring his soul to you. JOHN! LET HIM IN!!

Lol. Hopefully we’ll see a few more clips like this in the coming weeks of self isolation. Can you imagine how dumb Wrestlemania would be without a crowd? The grandaddy of them all.

For more of the same, check out The Rock vs Mankind in an empty arena. Classic match.