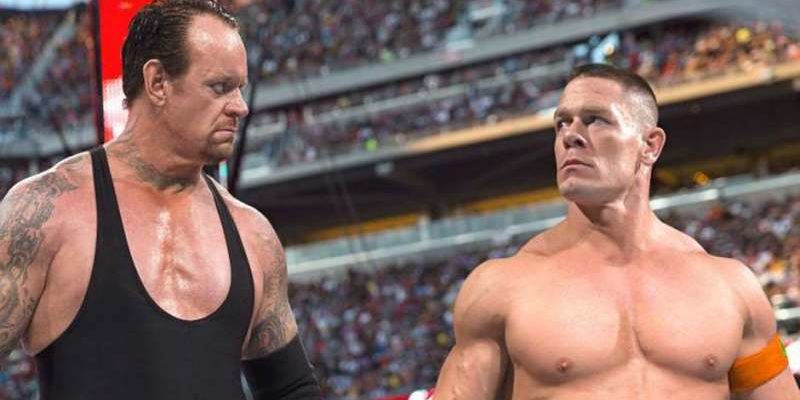 It was wrestling’s annual showpiece event Wrestlemania last night and once again some of the biggest names in the business battled it out on the biggest stage of them all.

One match that it was unsure whether or not would even happen was John Cena Vs The Undertaker. Cena has been calling out the Undertaker for a match at Wrestlemania for weeks now with no reply but the Dead Man failed to disappoint and showed up at the last minute and annihilated Cena in about five minutes, finishing him with a chokeslam followed by a tombstone.

Of course, if you know anything about WWE then you’ll know that the Undertaker hasn’t used the tombstone for a while so that kid’s would stop copying it and hurting themselves, so it was a pretty big deal that he busted out and the crowd popped hard for it. And it also seems like John Cena himself popped something else pretty hard for it as well, if the picture below is anything to go by:

Yep, that certainly looks like John Cena enjoyed getting tombstoned so much that he full on got an erection because of it. I mean who could blame him – it’s not like Taker busts that move out very often so it’s gonna feel pretty good if he chooses to do it on you, right? Hopefully this image goes down in Wrestlemania history because it’s clearly way more iconic than a bloody Roman Reigns or Brock Lesnar holding the belts. Nicely.

For more boners, check out the five most common penis injuries suffered by men. Ouch.