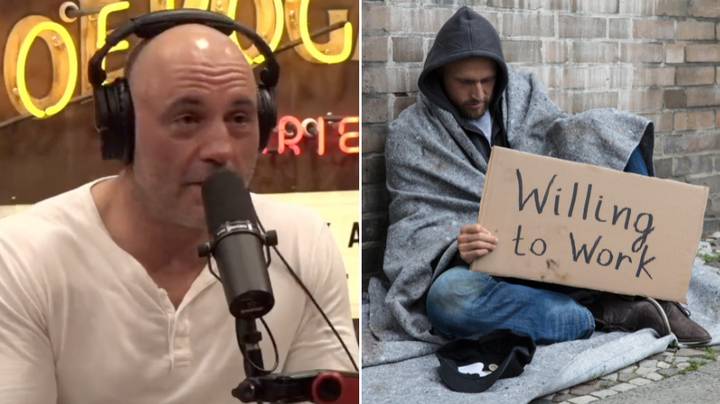 Another day, another stupid Joe Rogan controversy originating with something dumb he said on his podcast – although this time I think I’m probably on his side for once.

Rogan was speaking to comedian Tom Segura when the two found themselves discussing the homeless situation in Los Angeles. I’m not really sure how they ended up getting onto this idea, but Rogan then suggested that maybe they should start shooting homeless people as a solution to the problem. What a visionary.

Anyway, here’s what the pair of them had to say:

Nothing like a couple of rich fucks setting around smoking cigars and criticizing people at their rock bottom.
And that last line? “Maybe you should just go S**T the homeless people” pic.twitter.com/eCp1HSkJj4

Tom Segura: When you see stuff like that on the streets, at least in Los Angeles or California, that’s protected property. Like by law. That’s that’s person’s property by law.

Segura: Absolutely. If you were to try to move that or take that—

Rogan: You’d get arrested. Hilarious. But they wouldn’t arrest you if you shot somebody. Maybe you should just go shoot the homeless people.

Ehhh. I suppose it isn’t too nice how they’re talking about homeless people up there even to begin with but I think that they’re pretty much joking when they actually suggest murdering them. The problem is that Rogan’s listeners are known to take what he says a bit too seriously and there’s already a 47% increase in the murders of homeless people in the Los Angeles over the past year, so his comments probably aren’t going to be that useful here.

Classic Joe Rogan though – what do we expect from the guy by now? However, I think that some of these comments calling him out are probably a bit much as it was quite clearly a joke:

Sickening. Joe Rogan, who’s worth millions, pontificates on the plight of homeless people, then decides the best solution may be just to “shoot the homeless people”. pic.twitter.com/mgBGmarzgP

Joe Rogan (jokingly or not) suggesting that homeless folks should be shot is downright fucking EVIL.

I don’t normally choose to step foot into these things, but “Maybe you should just go S**T the homeless people” @joerogan can go fuck himself, seriously. Calling on ANYONE to shoot people who are struggling to just get through each day. He IS a piece of shit.

.@joerogan You’re a literal POS and I hope you go to jail for this bullshit.

I’d rather have a country FULL of homeless people than have ONE of you, ya fuckin’ flaccid numpty. https://t.co/q4qaRU1uYy

I think it’s probably a bit too easy to rip Rogan for his dumb comments – I should know as I do it all the time – but I really think this time was a joke and people shouldn’t be so outraged about it. As long as there isn’t an increase in murders of homeless people in Los Angeles inspired by Joe Rogan over the next couple of days, then hopefully we won’t have too much to worry about. Rogan loves this shit so it’s not like complaining about his stupid opinions is going to do any good anyway. Just saying.

For more of the same, check out Joe Rogan having a meltdown about a fake news story he made up. Calm down sometime dude.