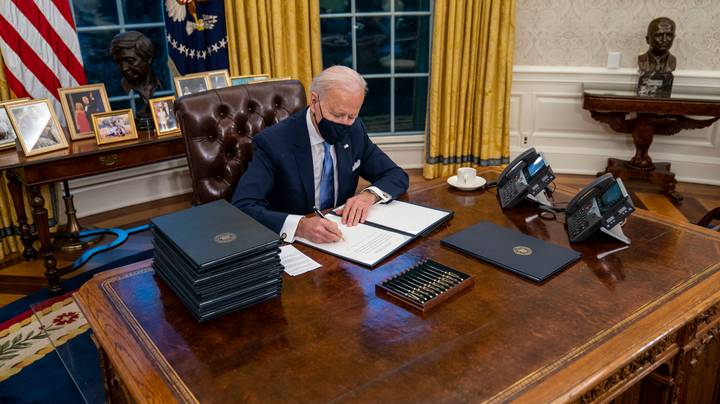 Not really sure how I missed this one – or maybe I had just forgotten about it because literally so many stupid things happened during Donald Trump’s reign as American President – but apparently Trump had a button installed on his desk in the Oval Office that he could press and someone would immediately show up with a Diet Coke for them.

I was picturing this being a button with the Diet Coke logo on it, but it sounds like it was just a regular unbranded button from this interview Trump took part in with Associated Press journalist Julie Pace back in 2017:

Midway through my interview with President Donald Trump, he reached over and pressed a red button on his desk in the Oval Office.

It didn’t trigger a nuclear launch or send advisers scurrying into the room.

Instead, a White House butler walked in with a single glass of Diet Coke on a silver tray for the commander in chief.

I mean if you’ve got the means why not flaunt it? Must be kinda annoying walking to the fridge and picking up a bottle and opening it and pouring it yourself hey? Wonder if Trump is going to have one wherever he ends up hanging out the most in the near future? Apparently he drinks 12 bottles of the stuff a day so would probably be a worthy addition.

Anyway, Biden has already removed the ridiculous button, with the news being broken by Times Radio’s Tom Newton Dunn on Twitter:

President Biden has removed the Diet Coke button. When @ShippersUnbound and I interviewed Donald Trump in 2019, we became fascinated by what the little red button did. Eventually Trump pressed it, and a butler swiftly brought in a Diet Coke on a silver platter. It’s gone now. pic.twitter.com/rFzhPaHYjk

For more of the same, check out this guy who found a dead mouse in his bottle of Diet Coke. Bet Trump wouldn’t have been happy with that.