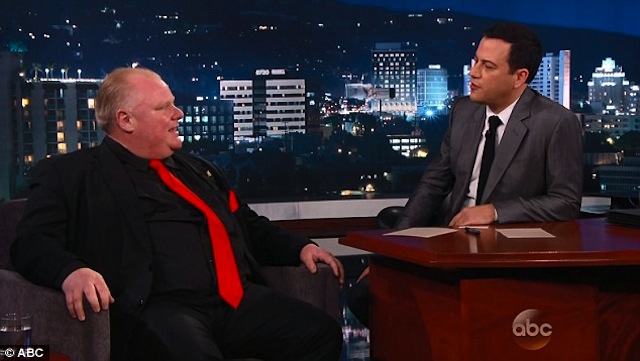 Jimmy Kimmel let rip into Rob Ford last night during their interview – was it uncalled for?

We’ve written a lot about Rob Ford on Sick Chirpse — the guy is just so entertaining and unlike any other mayor or political figure the world has ever seen.

Last night he was on the Jimmy Kimmel show, and while I enjoy Jimmy Kimmel he was being a bit of a dick to Rob Ford during their chat. If it was actually funny that would have been fine, but he just spends the whole time taking the piss out of Rob Ford’s tie, his weight, the fact that he’s sweating buckets, even tells him to go to rehab at one point. It was just dumb and condescending but I guess Ford should have seen it coming. The bit in Part 3 where he runs through the clips of Rob Ford doing dumb shit is quite funny though.

Anyway, Rob Ford took it all on the chin and actually came off as a very likeable man who doesn’t take himself too seriously at all. I’m not sure how well he’s doing at his actual job as mayor of Toronto (he insists he’s smashing it) but if he’s doing a good job then fuck it, let the guy smoke all the crack and make all the stupid videos he likes. I’m sure if you’re in Canada you probably hate the guy and think he deserved this but for the rest of the world Rob Ford is pretty awesome and hilarious and I for one don’t like to see him treated like this.

â˜› Next: Rob Ford: A History Of Idiocy And Some Choice Quotations