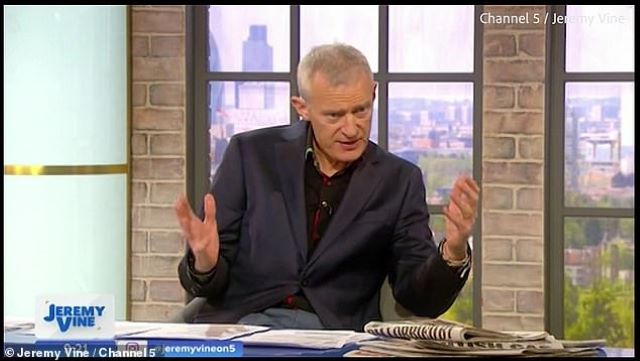 It seems like we can’t talk about anything these days without viewing it through the lens of racism, and sure enough Jeremy Vine frustrated viewers this week by posing a bizarre question around the funeral of Prince Philip this weekend.

Vine asked guest Shay Grewal whether she thought it was a problem that all 30 attendees at Prince Philip’s funeral would probably be white:

Well at least Shay Grewal gave the reasonable and obvious response there, but it’s just mind-boggling why Vine asked that question in the first place. Does he think we need diversity quotas at funerals? Is he just trying to shit-stir? Probably the latter IMO and as you might expect, it worked:

When is Jeremy Vine going to resign in favour of a black presenter?

According to some idiot called Jeremy Vine, one must question why a white family only has white mourners.

Jeremy Vine asks whether it is a problem that all attendees of Prince Phillip’s funeral will be white. Why on earth would he ask such a question? @JeremyVineOn5 #channel5 #woke #wokeracism #JeremyVine https://t.co/dVOmX0Y7Pl pic.twitter.com/Cfpi4Bqv5Q

Should the Royal Family pretend to have black relatives and invite them to Prince Philip’s funeral just to appease the woke generation and those hell-bent on re-writing history? Absolutely ridiculous! Sadly, not surprised with @theJeremyVine 🙄#JeremyVine.

It’s family members & I’m sure if there are black family members they will be there but if its an all white family id image that speaks for its self,what an absurd question from Jeremy Vine, you have gone down in my estimation as a presenter,what exactly are you trying to stir up

In fairness, he wasn’t saying it was a problem, just (weirdly) asking his POC guest if she thought it was a problem. Clearly rubbed everyone up the wrong way though, even if he thought he was asking a hard-hitting question that anyone would take seriously. As I said though – I think it was an intentional wind-up on some level. I mean it has to be… right?!

To watch a white BLM protester say the N-word in public and then try to explain why it’s OK for him to say it, click HERE. Oh dear…