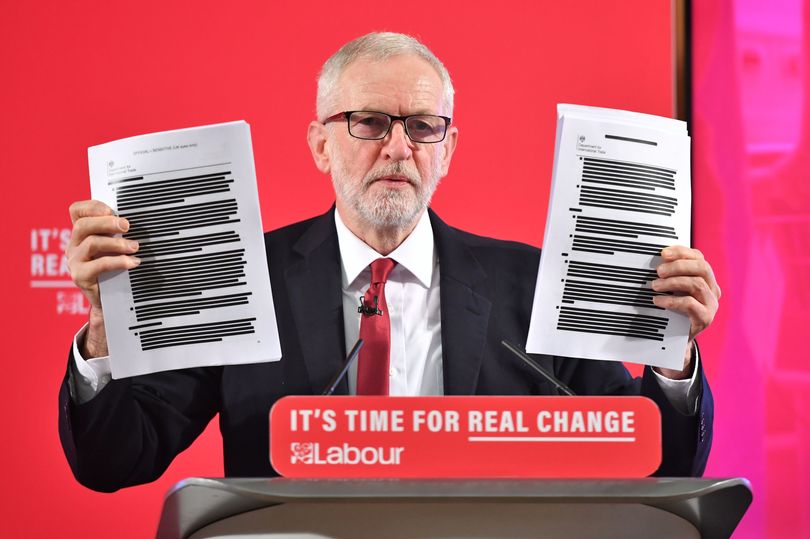 Election fever is sweeping the country right now and although there are hundreds of issues on the table – mainly revolving around who is the biggest twat admittedly – one of the biggest ones concerns the NHS and the idea that the Tories are willing to sell it off in a trade deal with the USA.

This is one of the key points of the Labour manifesto and in fairness it does seem like this is with good reason – thousands of Tory cuts have left the institution on its knees and Donald Trump even once said it was definitely on the table in an interview – the Conservatives have always denied that this is the case. Jeremy Corbyn has just challenged this though in an explosive press conference where he claims to have 451 redacted documents discussing the possibility of selling the NHS off to American big pharmaceutical companies.

The papers apparently detailed six meetings that have taken place in the UK and Washington over the past two years, with the most recent coming only a few months ago. Here’s the press conference as well as some of the key quotes:

We have now got evidence that under Boris Johnson the NHS is on the table and will be up for sale.

He tried to cover it up in a secret agenda and today it has been exposed.

We are talking here about secret talks for a deal with Donald Trump after Brexit.

Longer patents can only mean one thing – more expensive drugs. Lives will be put at risk as a result of this.

Labour and experts said big US corporations want to force up the price of our NHS drugs, the Conservatives said this was nonsense.

The US and UK have already finished discussions over patents for drugs.

This means only one thing, more expensive medicines.

One reason for US medicine prices being so much higher than ours is the patent regime ‘rigged’ for the big pharmaceutical companies.

It is now down to Boris Johnson to explain why he denied the things we can today read in black and white.

Well what about that hey? I mean in the era of fake news I’m not even sure if this is real because I’m sure Boris Johnson is just going to deny it so who knows what the truth is, but it’s a pretty major move from Corbyn to come out with something this outrageous. Shame that most of the media are still hung up on his perceived antisemitism though.

Anyway, he handed out copies of the report to journalists at the press conference so hopefully some of them can shed some light on whether it’s true or not. Not gonna tell you how to vote, but it seems like if you care about the NHS you should probably look into this more and what the Conservatives are saying and make your own mind up about what’s true and what isn’t. Might actually save your life one day.

For more of the same, check out Boris Johnson vowing to make Britain the greatest place on Earth. Maybe he’s telling the truth?