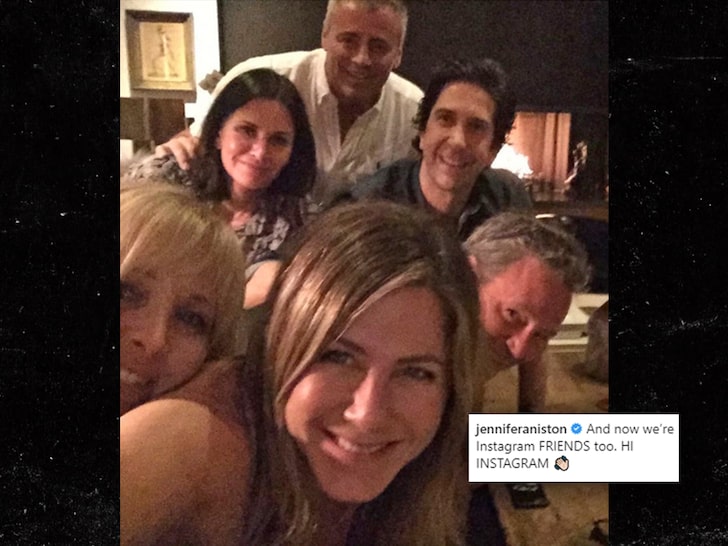 Could it finally be happening?

Jennifer Aniston has finally joined Instagram (groundbreaking news, I know) and the first thing she’s done is send the rumour mill into overdrive with her choice of first Instagram photo.

The TV legend shared a selfie with all her former Friends co-stars, revealing they all hung out together recently.

It’s been up a few hours at time of writing and already has over 4 million likes and 250,000+ comments, mostly from people freaking out about the possibility of a new series of Friends or Friends movie on Netflix.

Is everyone just reading too much into this? Probably. But it’s worth noting this year marks the 25th anniversary of the first series of Friends and that any other time there’s been some sort of Friends reunion there’s always someone missing – e.g. the two-hour reunion TV special in 2016 which Matthew Perry AKA Chandler no-showed. This is the first time in recent memory that all 6 Friends have posed in a photo together.

Clearly the demand is there, but all six of these guys still make $20 MILLION a year in royalties from Friends being syndicated around the world, so it would have to be a passion project if they were to do it because they’re clearly not short on cash. Or maybe they’ll just do it so people will finally STFU up about it.

Bonus: One second from every episode of F.R.I.E.N.D.S:

For a look at the feud between Warwick Davis and Jennifer Aniston after Aniston claimed she never starred in ‘Leprechaun’ with him, click HERE.