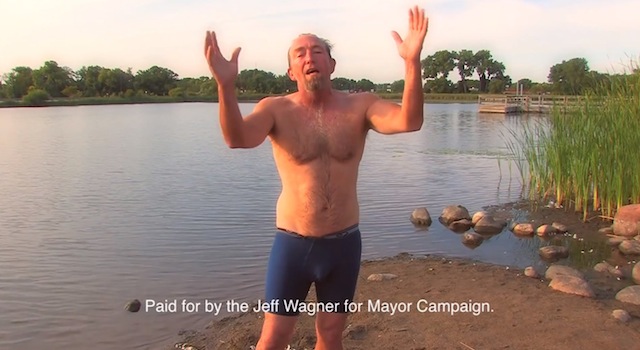 Minnesota state is known as the Land of 10,000 Lakes. Perhaps that is why a mayoral candidate from Minneapolis, the largest city in the state, decided to walk out of one in his campaign video. Or maybe not, at first glance it’s really very unclear.

Whatever the reason, Jeffrey Wagner has nailed it with his enthusiastically weird and wooden performance.

â˜› More Politics: Jeremy Clarkson Wants To Get Into Politics

The video is refreshingly honest, in it he tells the voters that he won’t take money from developers, and swears that he won’t even go to the strip clubs anymore — something that not every politician can promise. He also says that it is the media and the money who will be deciding who people are going to vote for, a claim that most mainstream media outlets were quick to substantiate by dismissing him in negative, put-down pieces.

He finishes the video by politely asking the people of Minneapolis to wake the fuck up, before disappearing back into the lake with a cup of coffee.

Jeffrey Wagner used a simple concept to endear people to his cause, and his video has subsequently gone viral. As he says in a patronising interview with some smiling-plastic-news-robots, before the campaign video no one was paying any attention to him. In the interview he also sheds some light on his choice of setting, saying the lake is “like a metaphor — keeping the sharks out of the water. The sharks are the politicians, the sharks are the lobbyists, the sharks are all the people that are doing the wrong things for the people.”

Fair play to the guy, I’d definitely vote for him.

â˜› Up Next: Nigerian Student Proves Gay Marriage Is Wrong With Science