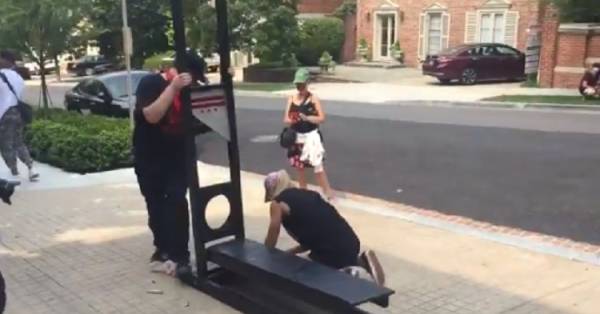 The protesters have Jeff Bezos in their sights.

Does Amazon CEO Jeff Bezos have too much money? Um, probably? $1 billion is a shit ton of money that most of us can’t even fathom, let alone $200 billion. I know that being worth $200 billion doesn’t mean you have $200 billion sitting in the bank but still – the guy is ridiculously, mind-blowingly rich and there’s plenty of people who aren’t very happy about that.

On the same day that Jeff Bezos became the first man to hit a net worth of $200 billion, a guillotine was set up outside his DC home by Antifa types:

Protesters assembled outside of @JeffBezos‘s DC home have constructed a guillotine. pic.twitter.com/pDFcTg81K9

Where do these people even find a guillotine in 2020? IKEA? God knows. With the amount of properties Bezos must have around the world I wonder if he’s even been to his DC mansion recently or if he’s even aware this happened at all.

Here’s what the protesters were demanding…

The protesters were demanding a $30 minimum wage.https://t.co/QeOVxDWwEn

Well I guess they could have that, but then the goods and services they purchase with that money will increase 3x and we’ll be right back where we started. If only Bezos was OK with making $50 billion a year instead of $100 billion eh? (He actually only makes a base salary of $80,000 but obviously his Amazon shares are through the roof and increased massively during the pandemic). At the end of the day though every wage should be a living wage, and so maybe there’s a compromise to be made?

Whatever your thoughts on this, I’m not sure threatening to decapitate the richest man in the world by leaving a guillotine outside his home is the best way of going about things. But then I guess it takes some very desperate people to go to such extremes. The maddest part is Jeff Bezos is probably working to replace all his employees with robots anyway. Looks like we’re all fucked.

For the time Jeff Bezos donated $98 million to charity and people were still pissed off at him for not giving more, click HERE.