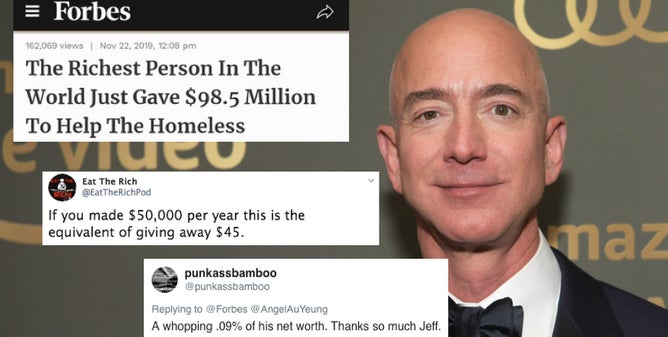 Amazon founder Jeff Bezos has announced that he has donated $98.5 million to 32 homeless charities in 23 US states, with each organisation being gifted between $1.25 million – $5 million.

Well apparently it’s not good enough for some people because while it’s obviously great that he’s donated all this money to help society’s most vulnerable, many feel that in proportion to Jeff Bezos’s $109 BILLION wealth, the amount he’s donated is tiny.

Here are some of the responses:

If you made $50,000 per year this is the equivalent of giving away $45. pic.twitter.com/yBAeL7ExRV

Jeff Bezos could buy a $150,000 house for every homeless person in America and still have almost $20 BILLION in personal wealth

A whopping .09% of his net worth. Thanks so much Jeff.

98.5 million ain’t that much when you’re on your way to becoming the worlds first trillionaire

Even Corbyn had something to say about it:

Bit harsh? I mean yeah maybe $98.5 million is peanuts to Jeff Bezos, but it’s a life-changing amount for the charities he’s donated it to and the people it will go towards helping.

“ The rich should help the poor! “

“ He only contributed 98 million! That’s nothing! “

Y’all find anything to complain about…it’s $98m, how much he make shouldn’t matter

I don’t get why people are mad at him for donating that much, he doesn’t owe anybody anything. He can do whatever he wants with his money

Ben Shapiro went IN on Jeremy Corbyn with his take on it – yikes:

It’s always disquieting when career useless people who have accomplished nothing and whose ideas are garbage criticize career useful people responsible for bettering the lives of millions https://t.co/HFSJbP9eie

You could say if Bezos and Amazon paid the tax they should be paying on the billions they make then that money could go even further to helping others than an annual donation of around $100m would. But then again would we ever really know how that tax money was spent? It would get funnelled into wars and all kinds of other shit before whatever’s leftover goes to charity. At least we know Bezos gave that full amount to charity personally.

You can make good arguments on either side, but I think we can all agree that Jeff Bezos (or anyone) giving $98.5 million to charity is a good thing regardless of personal wealth. Like one of those Tweets said, when was the last time you gave anything to charity?

For more billionaires, get a load of the mega-developer who put up a massive portrait of himself and his new wife in NYC to make his ex-wife jealous. Now that’s trolling – billionaire style.