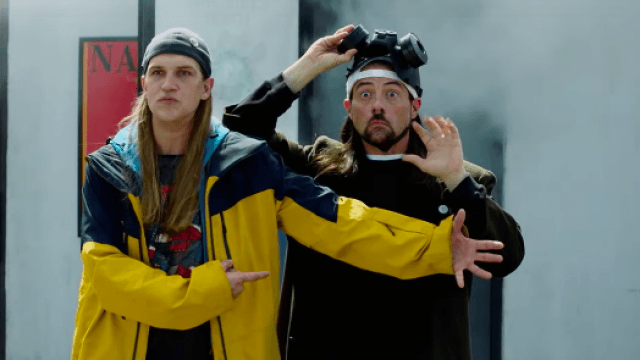 Back in the 90s, Kevin Smith could do no wrong and his first three movies were rightly hailed as masterpieces of their generation, but since then his career hasn’t really gone to plan with a whole load of dud movies in a row.

So when you’re career’s in a rut I guess the best thing to do is go back and look for a sure thing and that’s exactly what Smith is trying to do as he’s revisiting his two most beloved characters Jay and Silent Bob in a new movie that’s pretty much taking the piss out of the whole reboot formula by being called Jay And Silent Bob Reboot. The plot sees the hapless duo learning that a Hollywood studio is attempting to reboot an old movie based upon them, so they head out on a cross country trip to stop it again.

That’s pretty much the plot of Jay And Silent Bob Strike Back but I guess that’s part of the joke – anyway take a look at the trailer and see what you think:

That looks really stupid doesn’t it? given Smiths’s hit rate on movies I’m not really sure it’s gonna be that good, but maybe he’ll hit a return to form writing about his two most famous characters again. Matt Damon and Ben Affleck clearly decided it was worth showing up for, so maybe that’s somewhat of a recommendation?

Still on the fence on this one but I’ve got a bit of time until I need to make my mind up as the movie is being released in the US on October 15th but there’s no release date for the UK yet. Probably not that long afterward though.

For more of the same, check out Kevin Smith’s last movie, which was inspired by a Gumtree advert. It wasn’t very good.